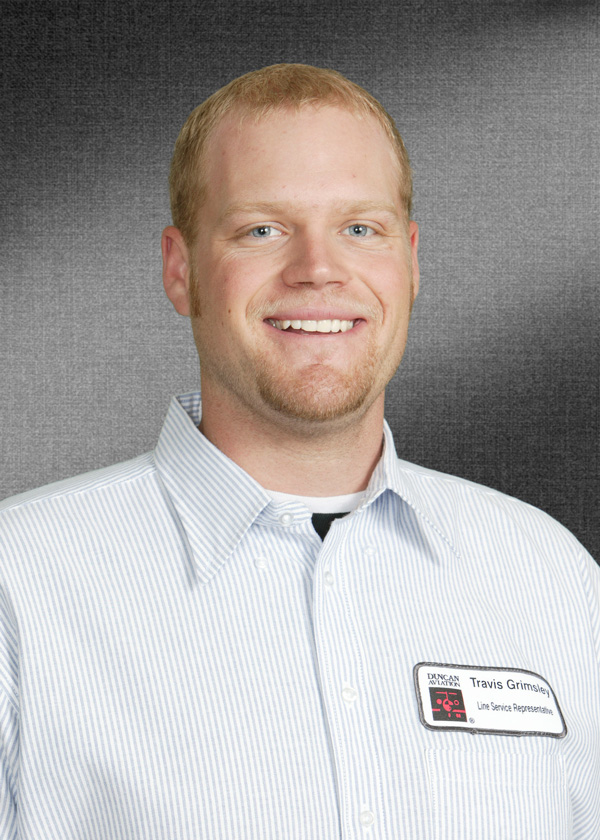 LINCOLN, NEB — Duncan Aviation is pleased to announce that Travis Grimsley is the new Manager of Customer Service at the company’s Battle Creek, Michigan, facility. Grimsley’s promotion follows a series of roles with increasing levels of responsibility since he started at Duncan Aviation as a Line Service Representative in 2005.

“Aviation is in my blood,” says Grimsley. His father, now a Regional Manager of Training for Flight Safety International in Orlando, Florida, was an airline mechanic at Northwest Airlines in Detroit while Grimsley was growing up. “I have my pilot’s license, and I’ve always wanted to work in the aviation industry. Duncan Aviation has an amazing culture and a positive atmosphere for both customers and employees. I’m fortunate to work in a field I’ve always been fond of.”

“I’m looking forward to meeting our maintenance customers and making sure they get the superior service they expect from Duncan Aviation,” says Grimsley. “Our Project Management group here in Battle Creek is a great team, and I’m excited to work more closely with them.”

Grimsley earned his Bachelor’s Degree from Western Michigan University in 2012. He and his wife, Dawn, have three children. Besides spending time with his family, he enjoys playing softball, hunting, fishing and playing guitar. He also loves to stir things up in the hangars by cheering for the Oakland Raiders and the Ohio State Buckeyes.

Duncan Aviation is an aircraft service provider supporting the aviation needs of government and business operators and other service providers. Services include major and minor airframe inspections, engine maintenance, major retrofits for cabin and cockpit systems, full paint and interior services, and preowned aircraft sales and acquisitions. Duncan Aviation also has international aircraft components solutions experts available 24/7/365 at +1 402.475.4125 who can handle any aircraft system problem with immediate exchanges, rotables, loaners or avionics/instrument/accessory repairs and overhauls. Complete service facilities are located in Battle Creek, Michigan; Lincoln, Nebraska; and Provo, Utah. We also have dozens of other facilities strategically located throughout the United States to provide customers with regional support and the quickest response possible to avionics, engine and airframe Aircraft On Ground (AOG) situations.