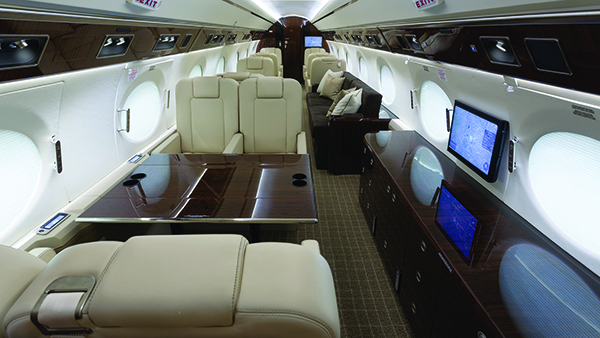 Duncan Aviation recently refurbished a 12-year-old Gulfstream G550 for a customer who appreciates the dependability of the aircraft and wanted it to remain an integral part of his fleet. By combining the work for an entirely new interior, a new exterior paint scheme and an upgrade of the Cabin Management System (CMS) with scheduled maintenance for the aircraft, Duncan Aviation minimized downtime and helped the customer maintain his flight schedule.

“Because of the reliability of Gulfstream aircraft, they continue to be dependable business tools regardless of age,” says Completions/Modifications Sales Manager Nate Klenke. “This serial number was a top performer in our client’s fleet, so we gave it a face lift and kept it flying.”

During the project’s planning, the client asked that the new interior design be consistent with the rest of the company’s fleet. Working with a conservative budget, Duncan Aviation Lead Designer Rachael Weverka incorporated stylized design elements using the existing panels and structure to develop a cabin environment that met the customer’s expectations.

After nearly two years of planning and preparing, our client brought the G550 to Lincoln, Nebraska, and Duncan Aviation delivered the completed aircraft on budget in less than three months. A representative of the customer was on-site while the aircraft was in Lincoln and attended daily team meetings, helped make day-to-day decisions, and had access to every Duncan Aviation team member who touched the aircraft.

“We like to partner with our clients on these complex projects and be transparent throughout the entire process,” says Nate, “This is an example of how Duncan Aviation supports operators through the entire life of the aircraft. Rene Cardona, one of Duncan Aviation’s Aircraft Sales Representatives, helped the customer buy this aircraft 12 years ago, and now we have helped extend its usefulness in an active fight department.”