This is the final article in this 3-part series about CMS equipment.

For more information and greater detail, you can download the Duncan Aviation Straight Talk About CMS, here: www.DuncanAviation.aero/resources/straight-talk/cabin-management-systems

The phrase source equipment pertains to any device installed in the aircraft that provides either an audio or video input to the CMS. The CMS then manages that audio/video source that plays/displays on the speakers, headsets, cabin displays, and personal electronic devices. The following are the most common types of source equipment found in an aircraft.

Moving map systems come in a mix of configurations and perform myriad tasks. In their most basic form, they display flight information (known in the industry as flight parameters). Examples of these parameters are ETA (Estimated Time of Arrival), ETE (Estimated Time Enroute), aircraft speed, outside air temperature, and altitude. Moving map systems also feature the aircraft’s route on a map and place the aircraft on the route so passengers can see where they are and watch the trip’s progress from a variety of views and zoom levels. The system automatically cycles through the pages of flight information, maps, and views. Most moving map systems also let the passenger manually step through the pages using a mode control switch that’s typically located at the VIP chair positions or using a CMS remote control.

As you can imagine, the newer map systems available are HD-capable with dramatic image improvement and detail over the older SD systems.

Typically, moving map systems are highly customizable with many options to consider. As the most used and viewed source item on the CMS, we recommend working with an avionics sales expert to have a clear understanding of the options and capabilities before choosing a moving map system.

With the huge popularity of personal electronic devices, such as smartphones, tablet PCs, Apple TVs, and many others, that now carry music, podcasts, movies, TV shows, and other content, many people want to interface and share this content with others in the cabin via the CMS. Installing an AUX (Auxiliary) port enables this through a cable that connects the device to the system.

A common AUX port you’ll find currently installed in aircraft today is the composite RCA port. There are three round connectors, color-coded white, red, and yellow for the left/right/audio and video (in that order). This type of port supports only SD.

An audio-only AUX port is also common. This is a single 1/8-inch audio connection and is the same shape and size as the common headset jack in your phone and other devices. In fact, the only way to tell the difference between an audio input port and a headset jack is that the input port is typically labeled AUX.

There are other types of AUX ports for HD. Component ports use the same RCA type connectors but include two additional connectors for video. There are a total of five RCA-type connectors in a component video port. This is an early generation HD input port type, and it’s rarely found or installed in aircraft. The most common HD AUX port currently found in both the consumer electronics world and installed with HD-capable CMS systems today is HDMI. This is a single connector for both audio and HD video. It is common to install at least two HDMI AUX ports with any new HD-capable CMS system.

Blu-ray Disc and DVD players are still common types of source equipment for business aircraft. SD DVD players and discs have been available since the mid-1990s, and HD Blu-ray players and discs became available in the mid-2000s. The popularity of both Blu-ray disc and DVD players has dropped dramatically in recent years for home use because of the more convenient streaming services that are available today. Streaming requires a fast Internet connection, and even though many aircraft have in-flight Internet connections, it is often not practical to stream content to aircraft due to bandwidth limitations and service costs. In spite of their diminishing popularity at home, Blu-ray disc players as a source for a new CMS is still a practical way to watch HD movies.

A media server is a device with a hard drive that is capable of storing vast amounts of movies, music, and other digital media content. Media servers are similar to DVRs used in homes today but lack the recording capability of DVRs. You load content onto the server and access it via an on-screen menu.

There are two types of media servers: subscription-based and non-subscription based.

Subscription-based servers require an active subscription with a service provider to provide the content. The server is loaded with a few hundred movies, TV shows, and other content and is updated on a periodic basis with new releases. The advantage of this type of system is that it provides hassle-free management of the content, and there are no questions about the legality of storing this content on the server due to DRM (Digital Rights Management). We’ll mention more on this later. The downsides are that subscriptions can be costly, and you do not get to choose the content.

Non-subscription-based media servers are basically a vast hard-drive-type storage device with a GUI (Graphical User Interface) to see, choose, and control the content. The advantages of this system are that you choose the content and pay no subscription fees. The downsides are the work involved with managing the content and the questionable legality of copying DRM-protected content to your server.

Movies, TV shows, and music are copyright-protected, and all digital media carry a DRM code to prevent copying and piracy. When a movie or TV show on DVD or Blu-ray disc is converted to a form that can be loaded onto a media server, the software used to do this removes the DRM code. This process is also known as ripping, and it’s illegal. Duncan Aviation does not condone this process. You can buy some content that’s in a compatible digital format, and is completely legal, but it will carry the DRM code, and the media server will need to authenticate it using an Internet connection before the content will play.

Another fun and practical source to consider are cameras. They can be mounted on the pilot’s glare shield giving a pilot’s eye view, and they can be mounted externally as well. Common external locations are up on the leading edge of the vertical stabilizer giving a wonderful forward-facing top view of the aircraft, or on the belly, providing a very practical view of the gear. Belly mounted cameras are often quad (or four cameras built into one housing) providing forward, aft, left, and right views.

Nearly all cameras installed on business aircraft up until recently output in SD to the CMS. New HD cameras are now available and provide a dramatic improvement in image quality. Upgrading existing cameras to HD should be considered during a CMS upgrade.

Another practical camera option to consider is infrared. These EVS (Enhanced Vision System) cameras form images using infrared radiation or heat. The warmer the object in view, the whiter it will appear on screen. This is helpful in seeing better at night and in light fog, smoke, or haze. People and animal heat signatures are clearly visible at night, providing an excellent level of situational awareness and safety for the pilots in low visibility situations.

Both the infrared and belly camera types are primarily displayed in the flight deck for the pilots. The signal can also be sent to the CMS to be displayed on the cabin monitors.

Satellite radio service for aircraft is the same SiriusXM service available (and popular) in the automotive industry today. The system consists of a small puck antenna (similar in size to a GPS antenna) and a receiver unit, both designed for and certified for use in an aircraft. XM radio units are available with 1-to-8 receivers. With the single-channel unit, all passengers must listen to the same programming. The multi-receiver systems allow multiple passengers to listen to different programing at the same time.

The service fees and equipment are relatively inexpensive, making it a popular and practical source option for aircraft that operate primarily within its service range of the continental United States. 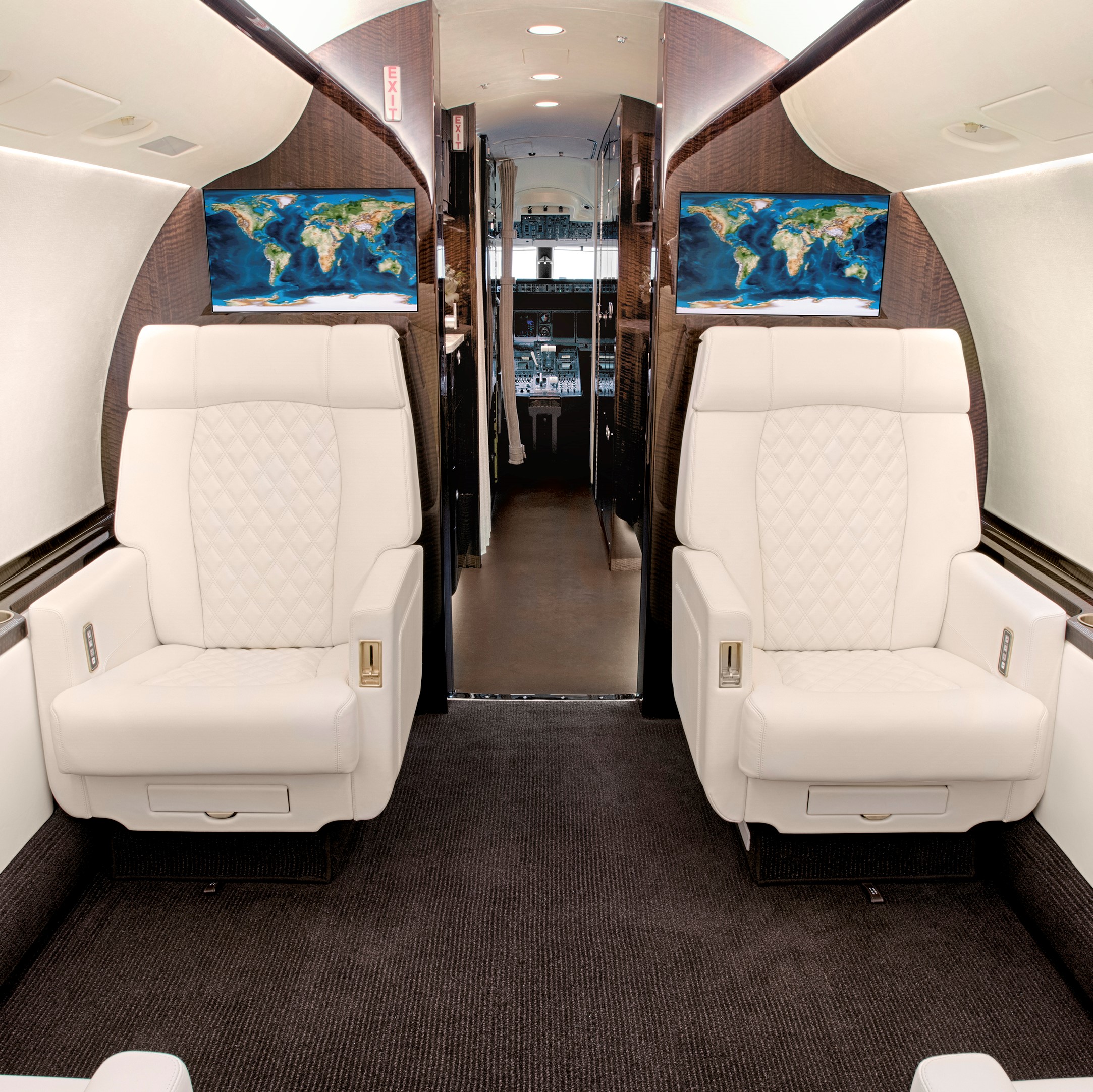 As with the satellite television service available in your home, DIRECTV satellites broadcast content directly to a suitably equipped aircraft. The system converts that signal into audio and video outputs for your entertainment system. DIRECTV for aviation will make the switch from broadcasting in SD to HD within the next few years. The latest information as of this writing is that HD content will be available at the end of 2023. Existing SD DIRECTV systems in aircraft will not work after this switch occurs and upgrades for HD capability will be required to continue to receive DIRECTV content.

Service is not currently available around the globe, but it is available in the continental United States, Europe, North Africa, and much of the Middle East and Asia.

Each location pings a different satellite that broadcasts content tailored to a particular region. The content caters to the tastes and sensibilities of the people in the region into which you are flying, and you may find only a few channels with content in English in regions outside of the United States and Europe.

If you’re flying in and out of multiple regions globally, you will need additional receivers. And, as with your home-entertainment service provider, you’ll be able to subscribe to different tiers and add premium content.

Satellite TV systems use a high-gain antenna mounted on top of the vertical stabilizer under the radome and need sufficient clearance in order to maneuver around and receive signals. The dish-shaped antenna moves in order to receive the best signal possible, and reception may be affected by weather conditions.