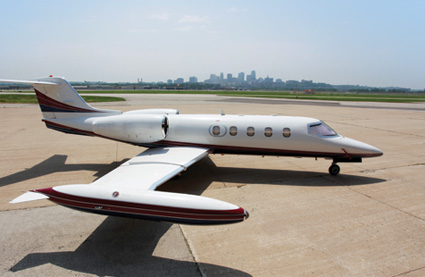 Duncan Aviation and partner Signature Flight Support Corp.'s Signature TECHNICAir™ are pleased to announce that we have opened two new satellite avionics shops in Missouri: one in St. Louis and one in Kansas City.

"We are excited to provide avionics services in these two busy, corporate airports," says Matt Nelson, Duncan Aviation's Manager of Satellite Operations. "Our avionics services are well-known throughout the industry and we are confident that these facilities will be excellent extensions for our avionics and avionics installations services."

The structure for the new avionics shops is similar to the arrangement Duncan Aviation has had since 2007 with Signature Flight Support at the St. Paul, Minnesota, fixed-base operation (FBO). Signature TECHNICAir™ provides full maintenance services at the facility while Duncan Aviation provides avionics services.

Hoping to build on the successful relationship the two companies have in St. Paul, Signature's TECHNICAirTM approached Duncan Aviation about supporting avionics customers in their Kansas City and St. Louis shops.

One of the first tasks Matt had with this partnership was to find the best possible leadership for the endeavor. He found that in dedicated Duncan Aviation team member Jeff Aman, who is the Manager of the Duncan Aviation-Kansas City and Duncan Aviation-St. Louis avionics shops.

Jeff has worked for Duncan Aviation in a variety of roles and most recently was an Avionics Tech III for the Duncan Aviation-Scottsdale avionics shop.

"I am excited to bring the Duncan Aviation spirit to the Kansas City and St. Louis aviation communities," Jeff says. "Top-shelf customer service and support will be the main focus in both locations."

Born in Santa Monica, California, and raised in Lake Arrowhead, California, Jeff has been involved in aviation since high school and earned his pilot's license early on. Although he originally wanted to pursue a career as a pilot, he soon found that was a pretty expensive endeavor. Jeff moved to Colorado in 1986 to attend Colorado Aero Tech for his A&P. He later returned to school to learn about advanced electronics technology and was hired on at Duncan Aviation's Englewood, Colorado satellite shop in 1995.

He ran the Broomfield, Colorado, satellite shop for three years until 2003. After a brief hiatus from Duncan Aviation where he served as Director of Maintenance / Avionics Manager for a couple of corporate flight departments, Jeff returned to the company in 2008.

Jeff, his wife, Bridget, and their eight-year-old daughter, Jordan, moved from the sunshine of Scottsdale to Shawnee Mission, Kansas, in the middle of winter! Jeff says he welcomed the move, though, because he was anxious to get back to good hunting country. Additionally, Jeff is no stranger to snow, having spent 17 years in Colorado. Bridget is originally from Broomfield and Jeff's 19-year-old stepson, Darren, goes to school at Front Range Community College in Denver. So they return to Colorado often to visit family and to ski.

Among the things Jeff will miss about leaving Arizona are some of its critters—namely rattlesnakes and scorpions. Jeff says, "I'm kind of a snake guy. Growing up in California, my brother and I hunted rattlesnakes. We kept them in aquariums, which my mom didn't especially like."

Jeff explained that there are 13 species of rattlesnake in Arizona, and he likes the diamondbacks, sidewinders, and speckled rattlesnakes. "For a while, my daughter Jordan and I kept a giant, hairy scorpion. It was beige and about six inches long. We fed it crickets and although it was kind of creepy to watch it eat, it was pretty interesting, too. My wife hated it!" (The scorpion was named "Scorpion" and they did not hold it!)

Throughout Jeff's aviation career, he's held a variety of positions. He's worked for sheet-metal shops, maintenance shops, in corporate flight departments, and in avionics. Jeff says, "One of the best things about working at Duncan Aviation is that I've learned a lot from everyone I've interacted with; we have an unprecedented pool of amazing talent."

Now that Duncan Aviation talent can be found in Missouri, too. In addition to providing leadership at the new avionics shops, Duncan Aviation will oversee avionics and maintenance support at the facilities.

«Previous: When It Comes to Engine Work, We Respond… Rapidly
»Next: ADS-B: Critical Factors & Considerations for Business Aircraft