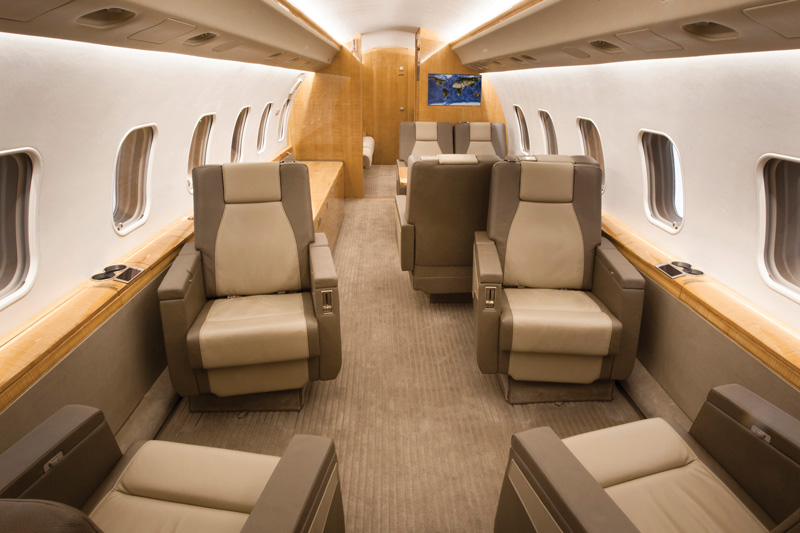 The 8C inspection was coupled with installation of Rockwell Collins' Venue High-Definition Cabin Management System, as well as full paint and partial interior.

Duncan Aviation performs the 8C inspection on Bombardier Global Express aircraft at its Nebraska, Utah and Michigan facilities, and has several scheduled well into 2014. The following is a first-hand account of one satisfied customer’s experience.

A major Bombardier Global Express inspection is due after 10 years following "entry into service" and includes the landing gear as well as a systems inspection. A limited number of Maintenance, Repair and Overhaul (MRO) facilities are capable of completing large inspections like the 8C. Even fewer perform the entire inspection in-house and offer paint, interior and avionics services in addition to other customer requests. Duncan Aviation is proud to be among the few who do. It’s those additional services, combined with decades of experience that appeal to potential customers. 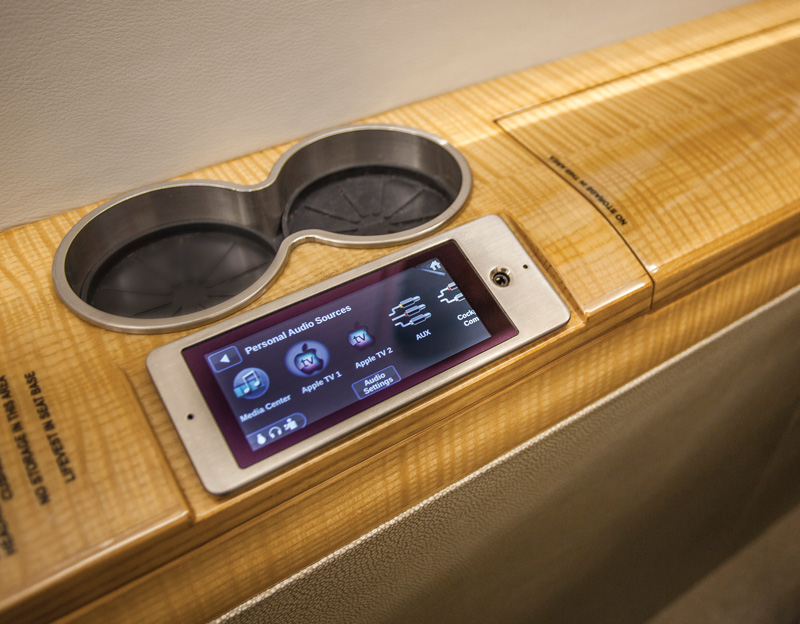 “The expertise, the knowledge, the follow-up—that’s value,” says Greg Hamelink, chief of maintenance for a medical equipment firm. “We look at the whole picture when we compare quotes, preferring to look at the total value and not just the cheapest cost. In this case, we liked the value offered by Duncan Aviation. We have a relationship with the company and know they have the experience as well as the skills to get the job done right.”

The 8C inspection, which also includes 4C, 2C and 1C obligations, takes approximately 14,000 labor hours and leaves the aircraft disassembled, creating an ideal time for additional modifications and upgrades. In this case, it was coupled with installation of Rockwell Collins’ Venue High Definition Cabin Management System (CMS), other avionics work as well as full paint and a partial interior.

“We realized the inspection was going to be a big investment, both in time and budget, so we highlighted the modifications that would allow the company to utilize the aircraft and the time of those on board most efficiently. We also worked with Duncan Aviation to minimize costs in other areas that needed to be addressed but weren’t a top priority,” says Greg.

“THE EXPERTISE, THE KNOWLEDGE, THE FOLLOW-UP—THAT’S VALUE.”

When an aircraft comes to a Duncan Aviation facility, the customer is assigned a dedicated team with a project manager, designer and a variety of area team leads based on the project. The planning among team members prior to the aircraft’s arrival coupled with their attitudes and desire to please the customer were a recipe for success.

Project Manager Gary Dunn had the milestones laid out and the team at Duncan Aviation’s Battle Creek, Michigan, location took full ownership and made sure everything exceeded Duncan Aviation's standards and the customer's expectations. 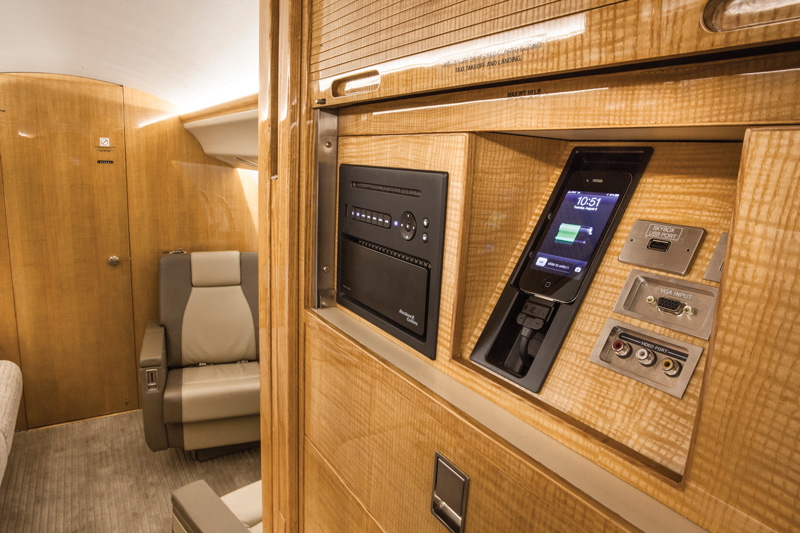 The Venue system is paired with Skybox, which streams up to one terabyte of business documents or presentations from the devices to the cabin displays.

What is Duncan Aviation Quality?: Avionics

The majority of the Global’s modifications happened in avionics, and one of the most noticeable changes was the upgrade to the CMS.

“The existing CMS worked well, but when we considered the age combined with the increasingly complicated support for it, we could have created some sort of Band-Aid for the time being, but it just made sense to upgrade the system during the inspection,” says Greg.

Avionics Sales Representative Chad Ostertag says the Venue system is paired with Skybox, which streams up to one terabyte of business documents or presentations from the devices to the cabin displays, which include three 24-inch monitors and six personal monitors. It allows a passenger to open a presentation on his or her iPad and project it throughout the aircraft instead of everyone trying to look at one screen.

“IT JUST MADE SENSE TO UPGRADE THE SYSTEM DURING THE INSPECTION.”

“The customer explained that on these longer flights, there’s a lot of down time and they needed a way to work on projects as a group,” says Chad. “When considering value and capability, I felt the Venue CMS was the best solution for them.”

As an installation crew lead, Matt Collins spent a lot of time troubleshooting and problem solving the Global. Very rarely does he encounter a simple rewiring and CMS swap, and he said this Venue interface wiring was markedly complex even though most of the new system’s pieces were direct replacements for the old Honeywell Baker CMS.

“We had a lot of modifications and replaced most of the wiring, which is pretty typical for any CMS change. But this one was exceptionally challenging, especially regarding the Venue to water system interface.” says Matt. “It was not a plug-and-play switch at all. In the end, all the engineering, wiring and software lined up for a smoothly running system.”

Though the main focus of the CMS is business, it also carries the responsibility of controlling nearly everything in the cabin, from lighting to audio to video and even the water system via a 10-inch galley control.

In addition to the CMS upgrade, Duncan Aviation’s avionics team was also busy with Bombardier’s Batch 3 upgrade requirement on the aircraft. While this process is not very labor intensive from an MRO standpoint, Gary says it’s costly for the customer. 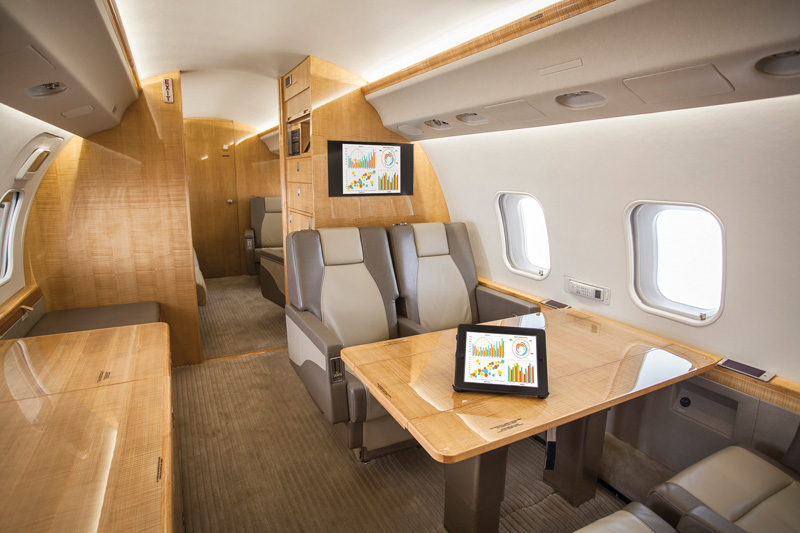 A major Service Bulletin introduces a software upgrade, referred to as Batch 3, which requires minor wiring additions as well as software updates to alter the Flight Management System (FMS), the Automatic Flight Control System (AFCS) and the Electronic Display System (EDS), all subsystems of the Integrated Avionics Computer (IAC) as well as to the On Board Replaceable Memory (OBRM) for aircraft equipped with a Head-Up Display (HUD).

“In today’s Global market, these aircraft are flying all over the world where different regulations are applied in each country. These aircraft must have the latest and greatest capabilities to interact with each country’s Air Traffic Control to ensure they’re given the highest priority to reach their destination efficiently,” says Gary. 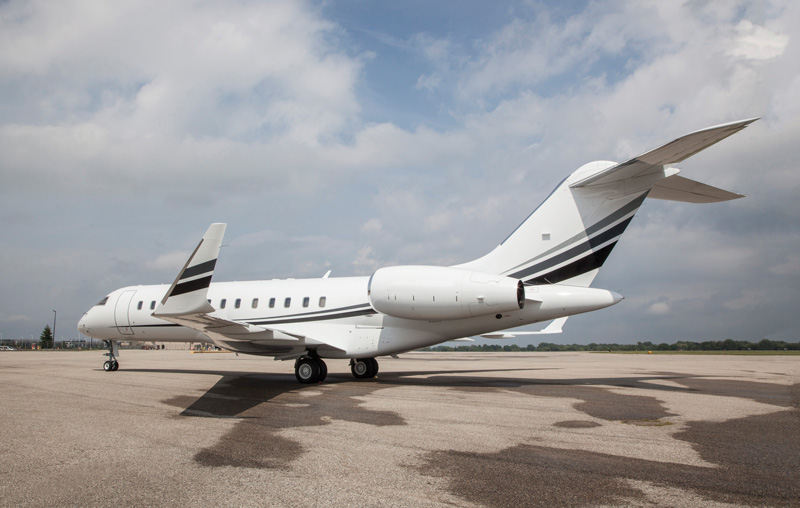 Duncan Aviation's Paint Team applied the same three-stripe paint scheme used on the customer's other two Challenger Aircraft to the Global so the fleet looked identical.

What is Duncan Aviation Quality?: Interior and Paint

When the owners purchased the aircraft approximately a year ago, they replaced the window sidewall materials and carpet. Consequently, much of the new and lightly used portions of the cabin were retained, but a partial interior design was strategically married to the existing portions. The new CMS made a huge impact on the interior of the aircraft, but the modern system would have left the rest of the decade-old Global looking a bit dated, so Duncan Aviation was able to make minor updates throughout the cabin to achieve that fresh-off-the-line feel.

“We wanted to upgrade the soft goods and change up the seats a bit. The existing seats were functional, but this purely-for-aesthetics modification drastically altered the appearance of the overall cabin,” says Greg.

“DUNCAN AVIATION IS ALWAYS TRANSPARENT WHEN IT COMES TO COMMUNICATION AND THAT'S WHAT SEPARATES THE BEST FROM THE REST.”

Duncan Aviation removed the older, more harsh lighting and added new EMTEQ LED upwash and downwash lighting in the main cabin to create a much friendlier aura in the aircraft with brighter, more even lighting with dimming features.

There were a few aspects of the interior the customer wanted to avoid having to rework if at all possible. Initially, Greg and the interior team thought they’d have to replace the drink rails in the cabin to accommodate the new CMS because the aircraft did not have many flat areas large enough to accommodate the new unit, so the team looked at some creative solutions to utilize areas that might normally be thought of as unusable locations as a way to retain the existing layout as well as the existing drink rail. The customer also had extra veneer the original owner had purchased in 2002 for smaller jobs, which saved time and money as they didn’t have to track down a match or switch out everything to avoid contrasting veneer.

The paint team applied the same a three-stripe paint scheme used on the customer's two Challengers to the Global so the fleet looked identical.

Greg has worked with Duncan Aviation’s Battle Creek location on both the company’s Challengers, and before that with their Learjets. The ability to handle projects quickly, efficiently and manage everything in one location from start to finish keeps him coming back. 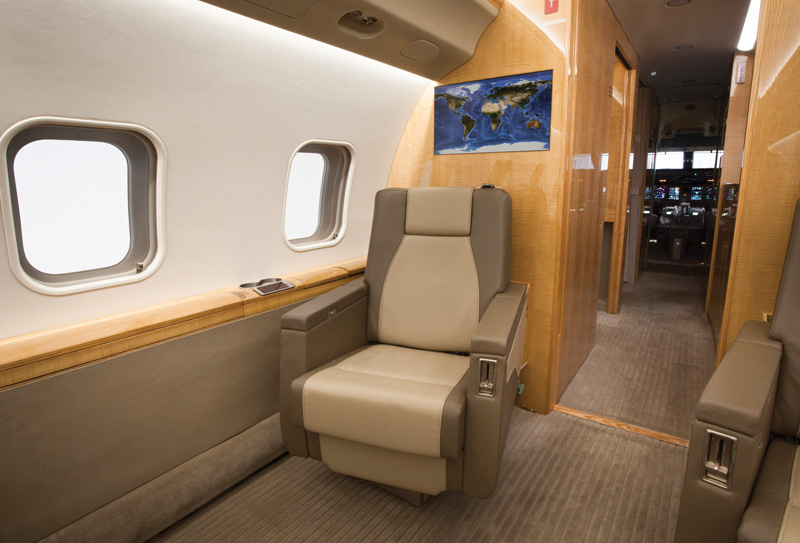 “Duncan Aviation is always really transparent when it comes to communication,” says Greg. “It’s important to be up-front about issues, because problems will always come up and what separates the best from the rest is how you work through those issues.”

Though project managers keep their customers in the loop, the myDuncan app provides customers with information any time of day or night. It documents everything and allows Greg to go back and check on action items completed days or weeks ago.

"Though I’m often close by, the app is often easier than making a phone call or trying to track down someone who might be at work different hours than I am. It’s just another tool that streamlines the process,” says Greg.

At the end of the day, Duncan Aviation team members combined their skills to improve this Global’s performance and added modifications to create a like-new aircraft.

With a limited number of companies capable of carrying out these large inspections, Duncan Aviation suggests operators schedule their maintenance slots as far in advance as possible to ensure the customer can secure the schedule and turntime they would like.

«Previous: From the Chairman Fall 2013
»Next: Interior Investments