Taming A Web Of Cofusion 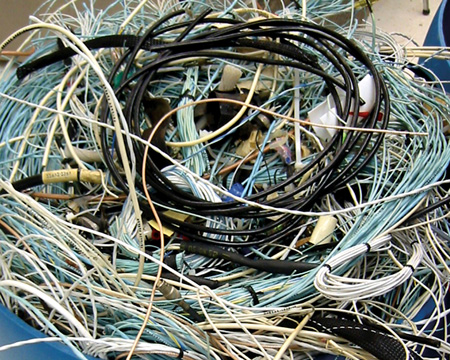 "I DON'T WANT ANOTHER FACILITY OPENING UP THIS CONTROL PANEL TO SEE MY WORK AND THINK THE SAME THING ABOUT DUNCAN AVIATION OR ME THAT I SAW THIS MESS."
– Chris Arellano
Engineering Production Planner

Chris Arellano is a Duncan Aviation wiring technician who often works in close quarters within aircraft cockpits. This particular day, he opened the instrument panel of a Learjet 35 for an RVSM upgrade. Armed with a set of schematics provided by the customer, Chris should have been ready to get to work. Instead, what he saw made him sit back and shake his head. He was faced with a web of wires shooting in all directions, crisscrossing directly behind and all the way across the back of the instruments, and not leaving much room for movement.

Without having to consult the work history of the aircraft, Chris knew in an instant this was not performed by any wiring technician at Duncan Aviation. Because the bar of excellence requires a higher standard of performance for the Duncan Aviation Installations team, no wiring technician would be allowed to leave their work in such disarray, nor would they want to. Every day, all of Chris’ work goes through a double inspection process, with the first set of eyes being his own. Chris doesn’t take this responsibility lightly. He makes sure his installations look professional and are safe now and for the future. When working behind instrument panels and floorboards, it is easy to perceive the quality and skill level of those who were there before. “I don’t want another facility opening up this control panel to see my work and think the same thing about Duncan Aviation or me that I thought when I saw this mess,” he says.

After Chris is satisfied with his work, he asks a qualified installations inspector to take another look. One of the written codes of conduct for all work performed in Duncan Aviation’s installations shop is: DO NOT think anything is “good enough.” In other words, if it isn’t installed to the exact specification on the documentation and in a professional and safe manner, then it isn’t good enough. This code applies to everyone from newly hired wiring technicians to master sheet metal technicians and quality inspectors. The procedures were written by experienced Duncan Aviation install technicians to ensure that every time a work order is completed, the finished product is safe, maintenance-friendly and meets the shop’s high bar of excellence.

However, some things just can’t be learned from a list or in school; they require on-the-job training (OJT). To accomplish this, Duncan Aviation trains new technicians to recognize and strive for the highest level of performance by pairing them with seasoned veterans. This OJT passes a wealth of experience, valuable industry knowledge and a culture of excellence to each generation within a tight, cohesive team atmosphere. Team members work together to do more than what is assigned; they watch out for each other, making sure installations meet industry standards and, more importantly, the company’s expectations. This requires every technician to become aware of and take ownership of their personal performance and encourages them to operate at a higher level. 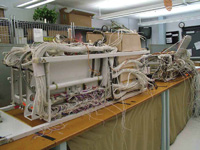 This means the double inspection process that begins with Chris actually becomes much more; it turns into a multi-layered quality process where many sets of eyes and mini-inspections happen along the way. Every department from airframe to interior supports each other and looks out for the work performed on each project. The holistic goal is to deliver aircraft back to customers as good as or even better than when they arrived. After more than 190 incoming run checks performed by every department scheduled to work, everyone has an accurate picture of an aircraft’s current condition and a plan to complete the work scope. During multi-shop work scopes, everyone keeps a special eye on avionics installations work, mainly because this shop’s work goes in first and cannot be tested until an interior is completely installed. If there is a squawk, no matter the size, the interior must be completely removed to reconcile the issue.

Mark Kahle, Team Leader in the Duncan Aviation’s installations department, welcomes the inspection opportunity that other departments provide. “We don’t want the interior to have to be removed because of a simple oversight that could have been resolved before installation,” he says. “It is in everyone’s best interest to watch out for irregularities throughout the entire process.”

THE RIGHT THING TO DO

ONE OF THE WRITTEN CODES OF CONDUCT FOR ALL WORK PERFORMED IN DUNCAN AVIATION'S INSTALLATIONS SHOP IS: DO NOT THINK ANYTHING IS "GOOD ENOUGH."

The wiring technicians and sheet metal specialists in the install shop are just as diligent when it comes to watching out for others. Because they are crawling upside down and inside small, cramped areas to accomplish some of their work, they have discovered previously unknown squawks, such as potty leaks and corrosion. In order to adhere to the “DO NOT think anything is good enough” mandate set forth, many Duncan Aviation install technicians are kept busy having to re-do work from other facilities in order to correct precious installations and bring them to Duncan Aviation standards. This includes everything from replacing missing or bad nut plates to recreating wiring schematics from scratch. They do this not because they have to, but because it is the right thing to do. Avionics systems work together much better when that extra effort is given to get all racks and brackets installed securely and wires bundled and routed correctly and at a safe distance from instruments.

Some might wonder why any aviation maintenance facility would allow shortcuts like those taken in the Lear 35 Chris Arellano worked on. Rich Kempston, Avionics Installation Assistant Manager, offers a simple explanation. “They probably don’t even know it is happening,” he says. “Typically, no one outside of the technicians on the floor sees the work behind the panels.”

Seventy percent of what the install technicians at Duncan Aviation do will not be seen by the customer or upper management. After the work is completed, it is covered up behind sidewalls, instrument panels and floor boards. The only time it will be uncovered is during a future maintenance event. This hidden situation may cause some to take unnecessary shortcuts only to save a little bit of time and make a few extra dollars. Rich adds, “You always get what you pay for.”

An Astra 1125 being rewired for a Rockwell Collins Pro Line 21 installation.

Knowing in all likelihood the customer would not see his work, Chris could have performed only what was necessary to complete the work scope and then forced the instrument panel back into place. Instead, beginning at the rear of the airplane while running new wires, he moved the existing wires to follow a more efficient path, adding couplers and bindings. The extra length found along the way was used behind the instrument panel to allow the wires to run at a safe distance from the new instruments. Before Chris turned the head of the final screw to secure the front instrument panel, the web of confusion that he first encountered had been swept away and in its place were well-marked and organized wire bundles matching exactly to a set of drawings provided back to the customer.

It is likely that the next time this panel needs to be removed, it will be done by Chris or another Duncan Aviation installation technician. Without having to consult the work history of this aircraft, the wiring technician will know in an instant this was performed by a professional who cared about his work and his customer.

While inside some of the smallest spaces of an aircraft or straddling the fuselage from above, Duncan Aviation installation professionals have discovered a myriad of unknown squawks that have saved customers future headaches or unspeakable tragedies. Here are a few examples:

• Tom Burke, a Duncan Aviation sheet metal technician, discovered cracked paint exposing corrosion underneath while installing an antenna on a Falcon 900. If left unattended, corrosion can spread like cancer and cause fatigue in the fuselage.

• While inside a Gulfstream G-I, Duncan Aviation sheet metal technicians discovered the frame was badly damaged and cut away in spots to make room for other installations. This modification was performed many years before industry experience and the FAA put in place more stringent regulations. Part of the bulkhead was rebuilt and fused into the existing frame. If left alone, this may have potentially caused a fatal accident.

«Previous: How to Schedule Unscheduled Assistance
»Next: When Passion Gets Technical