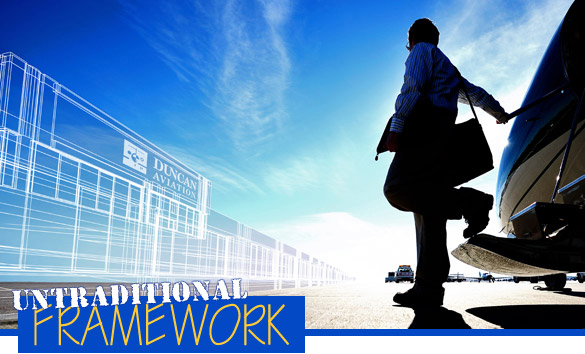 In an industry experiencing rapid and unprecedented change, some might wonder what the future has in store for Duncan Aviation and its new chairman. But the most respected family-owned aircraft service provider in the world succeeds in the face of adversity by holding fast to its traditions, some of which are very untraditional.

THE NEW CHAIRMANDOESN'T DEFINE HIMSELF BY HIS POSITION. IN FACT, HE SAYS HE'S NOT SO "BENT ON TITLES."

Todd Duncan is a relatively young chairman. But at the age of 41, the third generation Chairman of Duncan Aviation is hardly a newcomer. He packs a respectable 15 years of practical business experience and 20 years of flying experience. He’s also been around the company his entire life, watching it grow and change under the charge of his grandfather, company founder Donald Duncan, as well as his father, Chairman Emeritus Robert Duncan.

Upon meeting him, Todd is jovial with an energy that seems to bubble out of him. But the new chairman doesn’t define himself by his position. In fact, he says he’s not so “bent on titles.” For him, relationships drive the company forward. With the reigns of the company resting firmly in his hands, he’s more focused on the responsibility of leading, which he readily accepts… and shares.

“It’s never one person’s responsibility,” says Todd of being a leader. “It’s everybody’s.”

It’s a philosophy that penetrates all levels of Duncan Aviation, but it’s not new to the company. Robert fostered that philosophy during his tenure while building a legacy of innovation and respect for the individual. Today, Todd’s charge is to continue that legacy, which has served to encourage a unique corporate culture.

Since Duncan Aviation was founded in 1956, the members of the Duncan family have always been actively involved in leading the company. As a family-owned business, th

»Next: Message from the Chairman Spring 2008