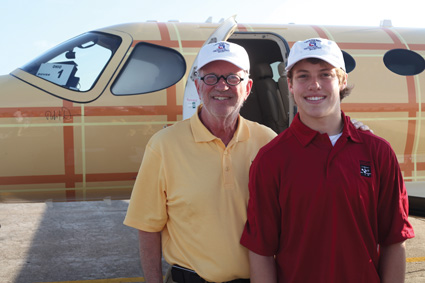 Robert Duncan with his grandson, P.K., after they arrived in Lincoln, Neb. for the Cessna Citation Special Olympics Airlift.

FROM THE CHAIRMAN - TODD DUNCAN 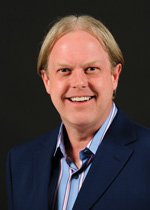 I was scheduled to be co-pilot with Dad on the Dove 1 flight for the Cessna Citation Special Olympics Airlift. A couple of nights before the airlift, though, my youngest son, P.K., expressed intense interest in going.

Some of the fondest memories I have from when I was roughly P.K.’s age occurred while flying business trips with my grandfather, Duncan Aviation founder Donald Duncan. I learned so much about the business, the company and the man during those trips. So it was an easy decision for me to allow P.K. to represent me on the Dove 1 flight. It was a great decision. I was at the Airlift Saturday morning when Dove 1 landed and felt the excitement and buzz from everyone on the ground awaiting that first athlete contingent. Whether it was the airlift’s ground support team ready to jump into action, the community volunteers ready to welcome athletes and coaches, or the community members who showed up to watch, the excitement was contagious.

P.K. really enjoyed the experience. He went to dinner with Dad and some customers on Friday night and then woke up bright and early Saturday to meet the athletes and fly them in to Lincoln for a 7:30 a.m. landing. He said it was a great, smooth flight with no bumps but with excited, happy passengers. He was also struck by how many people were there when they landed. On the ground, I ran in to hundreds of Duncan Aviation team members, Lincoln community leaders, customers, Cessna Aircraft Co. employees and management and even the heads of the AOPA, NBAA and GAMA industry associations. Everyone pulled together and rallied around the event. And the best thing is that none of us did it for us, we did it for the athletes. It truly was about them and making the event something they will always remember and cherish. Judging by the athletes from Ohio who rode in Dove 1, I’d say we were all successful in that goal.

Chad Doehring understands planning. As the Customer Service Manager at Duncan Aviation’s Lincoln, Nebraska, location, he understands how important project planning and communication is in the success of the aircraft projects that flow through Duncan Aviation facilities.

From March 2009 until this July, Chad also helped coordinate the ground support equipment and volunteers for the Cessna Citation Special Olympics Airlift, which took place this summer at the Lincoln Airport on July 17 and 24.

“We sent a good-sized team from Duncan Aviation to the airlift four years ago in Des Moines,” Chad says. “We learned from that experience and had an idea of what would be required to pull it off. The airlift fit well with the level of skills, experience and energy found in Duncan Aviation team members and I’m proud of how everyone pulled together and worked to make it happen.

“Personally,” Chad adds, “it was an experience that I absolutely enjoyed. It was very rewarding to go through months of sometimes tedious planning and then witness everything come together just as it was supposed to on the day of the event. The whole operation flowed seamlessly and without a hitch. “The benefits the athletes received from the Airlift were worn on their faces. The best part was seeing their smiles.”