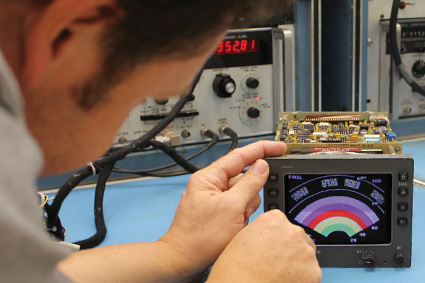 "Radar Season" hit's North America around the beginning of April, a time of year when storms make a properly functioning radar even more critical.

Obviously, pilots can see clear, blue skies. And they can usually see greenish, cumulonimbus tornado clouds and even those slate-gray, nimbostratus clouds looming on the horizon so they can arrange to fly around or above them. However, radar units help them prepare for what lies a little farther ahead. Typically, with the Honeywell Primus 870 Weather Radar unit, a pilot can see a sweep of a 300-mile radius on the screen, so he or she knows how to prepare for the near future.

Every component, whether it's an autopilot, gyro or radar unit,receives the same efficient treatment.

Duncan Aviation radar technicians use the term “Radar Season” to describe the time of year when high winds and instability in the lower atmosphere collide with cooler air in the upper atmosphere to whip up severe thunderstorms capable of producing tornadoes. Radar Season hits North America around the beginning of April, and that’s when pilots rely heavily on their radar units to perform perfectly and give them plenty of warning regarding any severe weather they may encounter.

Knowing this, when Duncan Aviation receives a radar unit to repair, the technicians strive to quickly isolate problems and get the much-needed radar system back to the waiting pilot. In fairness, though, Duncan Aviation technicians do that with every component they receive, not just radar units and not just during “Radar Season.”

Everyone, from the Tech Reps who help customers troubleshoot to the Entry Specialists in Shipping & Receiving to the Radar Technicians who actually repair the radar unit know that the longer an aircraft is “Aircraft On Ground” (AOG), the more money it’s costing the operator.

So every component, whether it’s an autopilot system, a gyro, or a radar unit, receives the same efficient treatment from the experienced Duncan Aviation technicians. To show you what goes on behind the scenes, let’s walk through the arrival of a unit for repair.

Not On The Radar

Let’s say a chief pilot has been experiencing sporadic problems with a Primus 870. He calls Dan Magnus, a Duncan Aviation Tech Rep since 1976 and currently the Avionics Tech Rep Team Leader. If the pilot knows what’s wrong with the unit, he’ll probably tell Dan, who will open a tentative work order.

In all likelihood, the chief pilot will know what’s wrong with the Primus 870 because it has an Electronic Flight Instrument System (EFIS), which displays error codes on-screen when the radar unit is malfunctioning.

If the pilot were dealing with a weather radar unit that didn’t display error codes, though, he might describe the problem to Dan. For instance, he may describe the full sweep of the radar as having a pinwheel effect. Dan will note that in the work order as a “spoking” problem, typically caused by erratic frequency changes, which could be indicative of a magnetron failure.

When the pilot decides to send the faulty radar unit in for repair, he or she (or the company he works for) may request aloaner so there’s no downtime for his aircraft. Dan or one of the Customer Account Reps can arrange to send a replacement “loaner” unit. If there are no loaners available or the pilot doesn’t want one, Dan flags the work order in the system, noting that the aircraft is AOG, so everyone knows that component needs a quick turnaround.

Once the work order has been opened, the Shipping & Receiving department knows who to direct the component to when it arrives. For problems with radar units, for instance, the unit will be delivered to Team Leader Rick Conner, who has been with Duncan Aviation for 22 years, 16 of those working on radar units. Rick will then assign the unit to one of the radar team’s experienced technicians.

On any given day, roughly 70 components arrive in Shipping & Receiving for the avionics area. Most of these components have arrived because, as noted, the aircraft owner, chief pilot, or director of maintenance has contacted a Tech Rep, and the Tech Rep has opened a work order.

Jerry Gregis, Material Services Team Leader, explains that on rare occasions, Shipping will receive a component from a customer who has not contacted a Tech Rep. Without any contact information or paperwork explaining why the component is here, the folks in Shipping have to engage in a bit of detective work to trace the component back to its rightful owner. Often, that’s easy to do by looking at the shipping order. There have been times, though, when even the name and address on the shipping order shed no light on who sent in the component. It may have arrived from a company or individual with whom Duncan Aviation has never done business, so the address on the shipping order is not in the system.

On any given day, about70 components arrive at Duncan Aviation for avionics service.

Jordec Cramer, Entry Specialist with the Shipping & Receiving department, says when that happens, he checks the data plate on the component. The data plate contains part and serial numbers, and with that information, he can usually trace the component back to the aircraft it came from. Jerry admits, “That scenario can be pretty perplexing.”

With most components, the expense of the unit and its necessity to the aircraft mean that the chief pilot or director of maintenance will contact a Tech Rep prior to sending in a component.

When the Tech Rep notes in the tentative work order that an aircraft is AOG, Shipping posts the name and address of the company on a board so the minute the component arrives, it’s logged in and routed to the appropriate bench.

Once the unit has been received, entered into the work order system, and sent to the appropriate bench, a technician will ascertain what’s wrong. As soon as that determination has been made, a Duncan Aviation Customer Account Rep will enter a quote with the cost of the repair into the system and contact the customer. There are three ways for the Account Reps to send quotes to customers.

First, if a company/individual has set up an account with myDuncan.aero, the Duncan Aviation project management system, the quote is immediately posted to the electronic account. The customer can log in, read the quote, and instantly approve the work. Setting up a myDuncan.aero account is quick and easy. To request access, visit www.myDuncan.aero.

Second, a customer may request that the quote be printed out and faxed. This is also a fairly speedy option.

Third, a customer may ask that a quote be printed out and mailed through the United States Postal Service. This option is understandably the slowest, and by the time the quote has been received by the customer, reviewed, approved, signed, and mailed back, a couple of weeks may have elapsed, and the component is still awaiting repair.

Once a quote has been approved, the repair will begin immediately. Once the technician has finished the repairs, the component will be checked, recertified, and sent to the appropriate Account Rep.

A Customer Account Rep enters a quote with costs and sends it to the customer who can approve via fax, mail, or myDuncan.aero. The Rep can also arrange for an exchange unit if that’s a better option for the customer. Exchanges make sense when a new unit is not available or when the cost of repair exceeds the value of the unit.

The Account Rep will bill the work order and work with the Shipping & Receiving department to return the repaired component to its owner as quickly as possible.

Typically, this entire process takes mere days. At every step of the way, Duncan Aviation team members are committed to getting your faulty component repaired and returned as quickly as possible so you can be back in the air instead of sitting on the ground.

Duncan Aviation has an inventory of loaner parts that now exceeds $7.5 million. In order to avoid aircraft downtime as your component is in for repair, you can borrow a replacement unit from the Duncan Aviation loaner program. Visitwww.DuncanAviation.aero/parts/loaners.php for information about the program.

A borrowed, or "loaner" unit, can help you avoid downtime while your component is in for repair.

To fill out a Loaner Agreement, go to www.DuncanAviation.aero/credit/ open_account.php to find printable forms, including an Avionics Loaner Agreement and a Credit Application.

For more information, visit www.DuncanAviation.aero/ credit/contact-credit.php for a list of Credit Analysts and their direct phone numbers.

If you don’t have Internet access, but you’d like information on the loaner program, call Duncan Aviation in Lincoln, Nebraska (402.475.2611) and ask for the Credit Department.

If you already have a loaner agreement on file, you can call an account representative directly and arrange to have a loaner sent (800.562.6377) while your component is being repaired.

Call one of the Duncan Aviation Technical Representatives to receive free, 24/7 advice or troubleshooting information; to send in a component for repair; and/or to arrange for a loaner. Our Tech Reps include the following:

Jerry Cable, Accessory Rep. Jerry is an expert in accessory units, including hydraulic equipment and pumps, pneumatic valves, wheels and brakes, emergency power supplies, electric motors, mechanical actuators, landing gear and accessory components. He is also a system specialist. You may reach him at his direct number, 402.479.8112.