JetResources Provides That For Preowned Aircraft 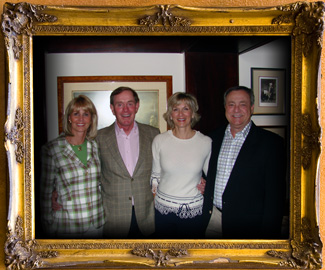 In his early 20s, Ed Abel saw James Garner and Lee Remick in "The Wheeler Dealers" and was struck by the idea that a person could actually own his own jet. "I thought owning your own private jet has got to be the ultimate in life,”" says Ed. That idea stuck with him for years.

At the time, he was a laborer for a construction company, and through hard work and good fortune, Ed started his own company in 1972. Ed says, "I always thought if you work to give your customers more than they are expecting, they’ll realize that the care and attention to detail, the quality of the work, and the special treatment are far more important in business than the almighty dollar."

In 1991, as a partner with an interest in a Learjet 25, Ed wanted his own aircraft, and he had his sights set on a Learjet 35. Bob McCammon, a Duncan Aviation Sales Representative, heard that Ed was looking. Based near the Lancaster Airport in Lititz, Pennsylvania, Ed had heard of Duncan Aviation, but he assumed the company was too big to give him the individualized service he expected. Despite reservations, Ed agreed to meet Bob at the Lancaster Airport.

At the meeting, Bob explained JetResources, Duncan Aviation’s aircraft acquisition service. Ed saw the benefits of using the unique program to find the best value in the market and had Duncan Aviation start the process of finding him a Lear 35A. Bob and another member of the JetResources team, Doug Kvassay, worked to find the right aircraft on Ed’s behalf. They were more thorough and attentive than Ed had expected.

For Ed, the similarity between his beliefs and how Duncan Aviation conducts business sold him on the company. Ed says, "I saw a Lear 35 with such-and-such a tail number and called Doug. Doug said, "Well, the price is a little on the high side for the number of hours, and the maintenance records indicate it’ll need quite a bit of work in the next couple of years.'"

"FROM THE PRE-BUY EXPERIENCE, I REALIZED DUNCAN AVIATION HAD MY BEST INTERESTS AT HEART."

Shortly after that, Doug told Ed that the aircraft selection was really tight and the prices were still high. Ed says, "Doug cautioned me, ‘You know, Ed, it’s just not a good time to buy. Let’s keep an eye on the market."

Doug’s research-based approach to sales sold Ed on Duncan Aviation’s unique customer service. Ed says he was impressed by the professionalism and knowledge of everyone he dealt with and the courtesy with which he was treated. Ed says, "From the pre-buy experience, I realized Duncan Aviation had my best interests at heart. Doug and Bob didn’t just try to do a quick deal or get me the highest-priced Lear 35 they could find. They looked around to find the best plane for the price."

Over the years, Ed sold the Lear 35 and bought a Learjet 31A. In 2008, he sold the 31A and bought his beloved Learjet 45. He says, "I’m a Learjet man." And each time, Duncan Aviation handled the sale of the former Lear and the purchase of the new one. For each plane, Ed also trusted Duncan Aviation with refurbishing the interior and repainting the exterior.

In 2008, when Ed decided to buy, Doug and Bob again looked around for the best plane at the best price. Ed says, "Duncan Aviation’s market assessment was instrumental in my decision to buy when I did. Doug and Bob checked previous owners and looked thoroughly at the maintenance records." By December 2008, when Ed bought his Learjet 45, the economy was well on its way down, and Ed decided it was a good time to buy.

Although the markets did fall farther, Ed was extremely pleased with the deal he made . . . So pleased that he encouraged his friend Jim Knott to let Duncan Aviation look around for a Learjet 45 for him since prices appeared to be near the bottom.

Jim jokes, "I got an even better deal than Ed, and I wasn’t even looking to own my own Learjet."

About 14 years ago, Jim met Ed and, over the years, he’d flown in Ed’s Learjet 31A a couple of times. The hassle-free flying appealed to Jim. Ed told Jim to call Duncan Aviation and let them find him a plane. JetResources began researching secondary markets for him, but for someone who wasn’t wholly convinced he needed his own aircraft, the time wasn’t quite right.

However, post-9/11, when enhanced security started demanding that air travelers arrive two hours before a flight and the lengthy security lines caused delays, Jim started feeling differently about the time commitment necessary for commercial travel. Immediately after the disaster, the market for business jets was somewhat soft, so Jim decided the time was right to buy, and the Duncan Aviation team began researching in earnest.

Although Ed Abel was enamored of his Learjet 31A, Jim says he has more kids than Ed and needed the additional, external storage offered on the Citation Ultra. Duncan Aviation was able to find him a very nice, low-time Ultra at a great price.

Eight years later, Jim says, again, he wasn’t necessarily in the market for a plane, but he had flown with Ed in his Learjet 45 and really liked it. The JetResources team began researching for Jim, and this time, they were looking for a Learjet 45. Jim says, "The Learjet 45 seats more than my Citation, and it’s quicker than the Ultra, too. With the 45, I didn’t have to sacrifice storage space; it’s a great-looking jet, and it’s fast. Besides, at the time I bought, the market was depressed, so I got a great plane for a great price."

"I FELT THAT DUNCAN AVIATION HAD DONE AN EXCELLENT JOB. IT’S A FIRST-CLASS OPERATION, AND I WAS REALLY IMPRESSED WITH HOW THE PLANE LOOKED WHEN DUNCAN HAD FINISHED IT."

Jim goes on to say, "Ed came with me to Duncan Aviation for the pre-buy inspection, and he was like a celebrity. Everybody at the company knows Ed. [The front desk] gave him a guest access badge, and he walked all over the Duncan facilities, checking everything out. And he was thrilled I was buying a Learjet 45 and getting all of the work done at Duncan. Ed just loves spending other people’s money!"

After buying the Learjet 45, Jim had Duncan Aviation reupholster the seats, put new wood and stain on the cabinets, and paint the exterior. He says, "Ed and his wife came with my wife and me to take possession. I felt that Duncan Aviation had done an excellent job. It’s a first-class operation, and I was really impressed with how the plane looked when Duncan had finished it."

Ed adds, "When it came time to pick up Jim’s Learjet 45—it was all newly refinished and painted—I went with Jim. It was a fantastic experience, and it wasn’t even my plane! Duncan Aviation goes out of its way to make the whole experience special and memorable."

Ed finishes with high praise for Duncan Aviation, "Duncan helped me make my dream come true. What’s better in America than that?"

To reach a sales professional directly, call one of the following:

«Previous: Chairman's Notes Summer 2010
»Next: Preparing for an Aircraft Transaction’s “Moment of Truth”