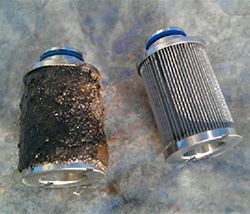 Simply put, fuel starvation occurs when the available fuel is unable to reach the engines. Water, debris and microbes in aircraft fuel tanks clog fuel supply lines and filters and ultimately starve the engines of the necessary fuel.

The two most commonly used jet fuels are straight kerosene or a kerosene-gasoline blend. These high-viscosity fuels have a greater ability to hold water and particulate matter in suspension and are more susceptible to fuel contamination than avgas. If left unmonitored, fuel contaminants can increase to a dangerous level and cause the engines to experience fuel starvation, resulting in power loss.

Water— During flight, the temperature of the fuel in the tanks decreases and causes the water in the fuel to settle to the bottom and freeze. These ice crystals can block fuel inlet pipes.

Surfactants— Surfactants are soap or detergent-like compounds introduced into the fuel from the refinery process, such as pipeline truck cross-contamination and fuel additives.

Microbial Growth— When water is present in the fuel, there is an increased probability of microbial growth and corrosion in the fuel tank. The most commonly found microbial organism is Cladosporium resinae, better known as FUEL BUGS. Fuel bugs produce a sludge-like substance that causes corrosion and fouls critical parts of the fuel system. This sludge can be a number of different colors (brown, green, white, red, black) and will smell like sulfur.

If you suspect microbial fuel contamination, there are a number of fuel kits available to test for results. Some of the more common ones are: MicrobMonitor, Easicult Combi, Biobor JF, Hy-Lite Jet-A1 Fuel Test and Fuelstat resinae.

A low number of microbes were found but not enough to justify further maintenance at this time. Record the data and continue the aircraft in service. Test again at the next scheduled interval.

A significant number of microbes were found and maintenance action is recommended. A biocide must be applied to the fuel tanks to kill the microbes. After biocide treatment, the engine and APU fuel filters should be replaced (dead microbes will detach from the tank structure and be injected by the boost pump inlets.)

A large number of microbes are found in the tank. These microbes have most likely formed biomats and caused fuel system problems and structural corrosion. A fuel tank entry is required to manually remove the growth and inspect the fuel tanks for corrosion. At this time, you are also required to inspect and clean the FQIS probes and the scavenge systems. After cleaning the tanks, apply a biocide to kill the microbes.

Always use the recommended soak time. Maintenance dosages are no longer recommended. Do not count flight time as part of the soak time. When fuel temperature drops during flight, the microbials go into suspended animation and the biocide will no longer be effective.

To remove microbes from a small contaminated area, use a lint-free cloth with a solution of three parts isopropyl alcohol to one part water.

Give Your Battery The Credit It Deserves

Staying Connected And Informed At Any Altitude