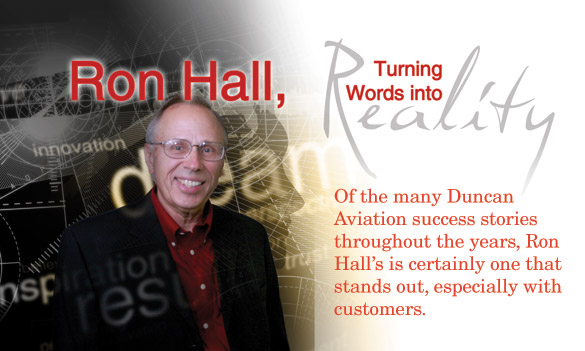 Ron grew up in Winfield, Kansas, and had an early passion for electronics. He joined the Civil Air Patrol while in high school, and learned about radios. He graduated in 1959 and enrolled at Cowley County Junior College. Ron then moved to Wichita State University majoring in Electrical Engineering. In Wichita, he worked as a television cameraman at KTVH-TV. The Air Force soon grabbed Ron’s attention. He was stationed at Keesler Air Force Base in Biloxi, Mississippi, with a training schedule heavy in electronics. After nine months at Keesler, Ron was transferred to the Lincoln AFB in Nebraska. He got to Lincoln just in time for the Cuban Missile Crisis. By 1965, Ron was out of the Air Force and back in Wichita working for Bill Lear. After three months at Learjet, Ron heard of a small company in Lincoln that intended to open an avionics shop. On a cold December day, he drove to Lincoln to learn more. When he arrived at American Learjet he entered a lobby with a strange spiral staircase and met Phil Hartwick. Phil was the manager of this new shop and he told Ron “I want to build the best avionics shop in the country.” Ron didn’t know it but he’d found his lifelong career!

Donald Duncan, the primary owner of American Learjet, wanted quality support for his new Learjet Distributorship. Lear avionics support would be the shop’s principle mission; however, more would be needed for the shop to grow on its own. The shop opened in April of 1966 with FAA Repair Station CRS 3304. The original shop was located in the area now occupied by Duncan Aviation’s Aircraft Sales Department. Not only was it to be the best avionics shop, it was among the largest, allowing for growth. The shop began with six people: Phil Hartwick, Gene Bartosh, Ed Mataya, Joe Norbeck, Jim Methe and Ron. The grand opening included Bill Lear and the great actor/comedian Danny Kaye. One of the early keys to success was the shop’s service center authorizations including Collins, King Radio, NARCO, RCA and Wilcox; new Lear 23s used Collins avionics so that’s where the initial focus was. It was a time of great turbulence, growth and innovation in electronics. After two years, Phil Hartwick left and American Learjet officially took the Duncan Aviation name. Ron became the shop manager and throughout the transitions of the first two years, he never forgot what Phil said about being the “best shop in the country.” They worked on just about anything to make money. Ron got his pilot’s license and used Duncan Aviation’s small airplanes to pick up radio work and sell radio and avionics services across Nebraska and western Iowa. 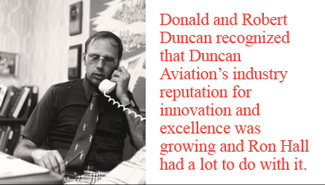 By 1972, small expansions were taking place at Duncan Aviation. An instrument shop and a new installations shop were added. Ron became manager of the install shop and Don Fiedler became manager of the avionics shop. Duncan Aviation fluctuated from between 75-100 employees. It was a time when the shops developed their own marketing and advertising. One of Ron’s favorite ideas used the prominence of the University of Nebraska’s football program. Many fans would fly to Lincoln for home games. Their unlocked airplanes sat on the ramp outside Duncan Aviation’s main hangar. Ron and his family would put together bags of candy and flyers touting avionics services then slip them into the unlocked cockpits.

By 1976, Ron was named Installations and Modifications Sales Manager. His office was located in Lincoln Airport’s old FAA building, which used to be where the current Donald Duncan Modifications and Completions Hangar stands today. Duncan Aviation also completed a second hangar and the new instrument, avionics and install shops moved there.

As the shops grew, so did the avionics and instrument units that had been replaced with new equipment. This inventory soon became an important bartering tool. The shops didn’t have budgets to purchase spare units for inventory but they did have plenty of old units with market value. Because Lincoln was a great stop for fuel, many operators would land, fuel up and drop off a malfunctioning radio for service. The avionics shop always had a spare to keep the operator flying until their next trip to Lincoln when they would drop off their “loaner” and have their original radio reinstalled. In addition, Ron would often trade the old trade-in radios for Collins and Learjet equipment that was needed for Lears. This process was repeated for other airframe models and eventually a large pool of “loaners” was inventoried. This was just one of the ways the famous Duncan Aviation loaner pool was established.

Of the many transitions and major events that took place, one in particular stood out for Ron. In the early ‘70s a new company, Global Navigation Inc., developed its GNS-200 VLF navigation system. There was nothing like it in the industry. Learjet immediately began installing them as an option. It was cutting-edge technology, right where Duncan Aviation needed and wanted to be. Ron worked hard to get Duncan Aviation a Global dealership but each time he called, he was denied dealership status by Global executives. Finally, he called on a day that none of the “executives” were around; he spoke with another employee who thought that partnership with Duncan Aviation was a great idea.
“The Global deal was one of the defining moments in Duncan Aviation’s history,” Ron explained. Soon Global developed the GNS-500. It sold for $25,000 and Ron and Duncan Aviation sold hundreds of them. In fact, Duncan Aviation rivaled Learjet as Global’s biggest customer. The unit was so popular and sold so quickly that prices, just like prices for early Learjets, quickly rose.

“Donald loved the Global system,” Ron added. Donald and Robert Duncan recognized that Duncan Aviation’s industry reputation for innovation and excellence was growing and Ron Hall had a lot to do with it. Citation and Learjet operators who owned aircraft without Global systems came to Duncan Aviation in growing numbers to have the units installed by the top independent aviation company in the country.

In 1981, Universal Avionics was formed. Universal improved on Global’s navigation products and Duncan Aviation became their number one dealer. But that was nothing new; the avionics shop received its first number one dealer rating in 1967 for Mitchell autopilots. Duncan Aviation was no longer just a place to get great deals on Lears and other aircraft; it had become the place for avionics and installations. Through his hard work, Ron was turning Phil Hartwick’s words into reality!

As all types of services grew, especially after Donald’s passing in 1981, avionics and install began to make a difference in other areas. In the early ‘90s, the FAA mandated commercial aircraft have Traffic Collision Avoidance Systems (TCAS) installed. Corporate aircraft were interested in TCAS technology too and wanted the added measure of safety. Larger airframes that didn’t come to Duncan Aviation for maintenance such as Challengers, Falcons and Hawkers, now inquired about TCAS installations. Ron’s persuasion and the reputation of the install shop were instrumental in convincing many of these new customers to use Duncan Aviation for TCAS installations. These contacts created immense new opportunities.

Many customers were impressed by Duncan Aviation service and expertise and they wondered why the company was not an authorized service center for their aircraft. This pressure and the work of many others began to pay dividends as Duncan Aviation gained more and more airframe service authorizations in the ‘90s.

“Technology drives so many things that it was natural that avionics and installations of new systems drove the push into larger airframes and more service authorizations,” Ron concluded.

On a personal note, Ron was introduced to his wife, Phyllis, by one of the original avionics technicians in 1966. They will celebrate their 41st anniversary this November. They have three children, Allen, Douglas and Gretchen, and eight grandchildren. In 1997, Ron returned to the University of Nebraska and completed his Business degree.

Ron’s 41-year career at Duncan Aviation is a remarkable one. He was involved with hundreds of decisions that helped the company grow into what it is today. He was one of many early pioneers who understood the vision of corporate aviation and what it represented.