According to Albert Einstein, it is insane to do the same thing over and over again but continue to expect different results. Yet that is what many aircraft operators see when they schedule maintenance events. Over and over again, they receive the same average results delivered with uninspired effort. 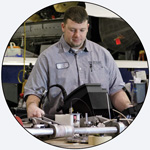 Duncan Aviation team members never shy away from a challenge and average results are never just good enough. Everyone is given the latitude to explore ways that can improve the customer experience without compromising integrity or their safety. Duncan Aviation has some of the most forward-thinking technicians in business aviation who have developed sustainable and repeatable maintenance and testing procedures that have added to or enhanced an already long list of capabilities.

In doing so, Duncan Aviation is redefining customers’ expectations by taking a new approach and delivering something unexpected.

This innovative spirit is at the very core of Duncan Aviation's culture, helping to produce an ongoing list of "industry firsts."

One of these firsts is a new Challenger full-system flap test that will accurately test and diagnose all electrical or mechanical intermittent flap squawks on the Bombardier Challenger 600 model series.

These intermittent squawks are the most expensive to solve and the most frustrating to diagnose. Customers are often frustrated by the time they reach the doors of Duncan Aviation for a flap system squawk. They have been battling this squawk for a long time, having to deal with unexpected downtime and loads of expenses only to be further frustrated because the squawk still isn't fixed. They are mad and skeptical of our abilities to effectively solve it.

"Duncan Aviation's victory is not won by a competitor's failure... It's by winning a customer because we are the solution to their needs," Scott Shefke, Duncan Aviation Challenger Tech Rep

"We share in their frustrations," says Scott Shefke, Duncan Aviation Challenger Tech Rep. "During our testing procedures, we’ve experienced the same intermittent failures with no clear solution. Because there are a myriad of things that can and do cause these squawks—mechanical and electrical, the list of culprits is endless. In order for us to develop an action plan for repair, we could not just begin with the current frustration of the customer; we had to start at the beginning, set the stage and systematically test all scenarios."

Motivated to find a solution, Scott set out to become more knowledgeable about the system, visiting the OEM and vendor repair facilities. It was while watching a vendor overhaul a Challenger actuator that he immediately knew, "we can do this." Taking his knowledge of the system and applying and interpreting the information in a new and different manner, a plan for a new test bench was created.

This new testing capability is fully portable and able to narrow down the system failure to an individual part or series of parts. It gives the Challenger team and customer a very specific remedy and plan that they can act upon. Gone are the vague statements such as, "it could be…" or “I think it's…" Duncan Aviation technicians now can confidently stand behind their recommendations of a course of action with an accurate estimate of downtime and price, because they have solid data to stand behind their words. Producing 100% accuracy in its diagnosis, there hasn’t been a customer return to Duncan Aviation demanding something different.

Innovation Out on a Wing 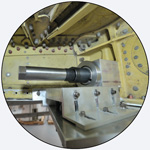 Teamwork, ingenuity and technical know-how allowed Duncan Aviation to fabricate an on-wing fixture to ream the bores of a Lear 55C found to have extensive corrosion.

During a scheduled quick-turn inspection on a Learjet 55C, significant corrosion was found in several areas of the aircraft, including the sockets for the main landing gear forward trunnion pins on the bottom side of the wing. Working with Learjet, Dave Schiver, Duncan Aviation Learjet Tech Rep, was given two options. Clean the corrosion using a standard hone or remove the wing and have it shipped by truck to Learjet for repair in their fixture. The hone method works by cleaning the surface, but is inaccurate and can easily create an oval where a concentric bore is required. And because there were already two other wings waiting in line for repair at Learjet, the wing would have had to wait its turn; the downtime before any repair could even begin was at least six months. No one was thrilled with the options and frustration began to set in.

Duncan Aviation is not known to quit on a project just because it is hard or the solution doesn't present itself with the first inspection or test and frustration can be highly motivating. Knowing there had to be another option, the Duncan Aviation Machine Shop, led by Rich Capps, came up with the idea of fabricating a fixture in-house to ream the bores instead. Although this had never been attempted in-the-field by the OEM or any other MRO, Learjet gave them the green light to try.

There was just one critical hurdle to overcome: building a fixture that could be mounted on the underside of the wing and hold the correct concentricity and axis alignment with no other points of reference but the hole itself. Not many MROs would allow a team the time and expense to take such a risk without a guarantee of a successful outcome. It is a testament to Duncan Aviation managers and leaders to recognize this innovative passion among the workforce, and step aside and get out of the way to allow it to happen.

With teamwork, ingenuity and superior technical know-how on their side, Rich and his team fabricated a fixture that met all requirements and successfully removed all corrosion, staying within allowable limits. Since the development of this new fixture, it has been called into service two more times, all with the same results.

A unique Duncan Aviation solution saves the customer more than six months of downtime and a significant amount of money.

The innovation behind the creation of the Challenger flap test and the Learjet wing fixture wasn’t because Duncan Aviation created new technology. Everyone in the industry has access to the same information from the same manuals, with similar tooling. What sets Duncan Aviation apart from other MROs is its ability to remain innovative. These new ideas and test capabilities are developed by taking a different approach to the same information to meet a customer need and change future expectations.

Therefore, true innovation isn't a new fixture or tooling. It’s the skilled technicians with specific knowledge of their craft, able to troubleshoot, diagnose and accurately interpret the data and apply the "we can do this" attitude.

Scott Shefke summed up the innovative spirit at Duncan Aviation in few words.

"Duncan Aviation's victory is not won by a competitor's failure to accurately fulfill a customer's need," Scott says. "It is by winning a customer because we are the solution to their needs. We want to be a solution to all of our customers' needs."