Want Mountains with your Maintenance? 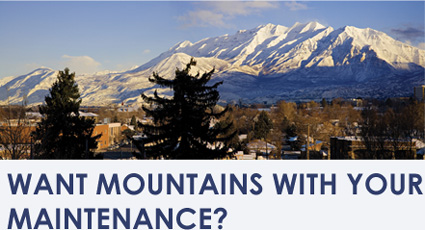 Duncan Aviation—Provo Will Be Ready To Provide Support This Summer

A lot has changed since then. The economic plummet seen worldwide over the last 12 months certainly impacted those plans, as the initial vision went from a 125-team-member facility built from the ground up to a 20-team-member leased facility. The original vision is still in place; its timing has just been postponed. For customers looking forward to Duncan Aviation airframe maintenance in the western U.S., the planning and re-planning will culminate in the opening of Duncan Aviation-Provo this August.

Duncan Aviation has an agreement with Million Air-Provo to lease hangar space from Million Air at the Provo Municipal Airport. The leased hangar will give Duncan Aviation 15,000 feet of space, a hangar footprint that will allow the equivalent of four Learjets or one Challenger and two Lears at a time.

"This lease agreement allows Duncan Aviation to establish a maintenance service presence in Provo by August 2010 without requiring the expense of building a new hangar facility right now," says Todd Duncan, Chairman of Duncan Aviation. "It is still Duncan Aviation's long-term plan and desire to build a nose-to-tail support facility in Provo and we will continue to evaluate the market and the economy and will begin preparation for a larger expansion as soon as we believe the timing to be correct. In the meantime, the lease with Million Air is a perfect solution and we are proud to align with such a respected, forward-thinking company."

Bill Haberstock, CEO of Keystone Aviation, which owns and operates the Million Air-Provo facility, agrees, saying: "This is an opportunity for our operation to partner with one of the country's premier major repair and overhaul facilities and accelerate their entrance into this market. Since our first look at the Provo environment, we have believed in the potential of the airport. In these economic times, this kind of agreement can keep the growth in place and position both our companies positively for the recovery."

When Duncan Aviation-Provo opens its doors, it will have service center authorizations from both Bombardier and Embraer.

The facility will be a Bombardier Authorized Service Facility (ASF) for Learjet and Challenger aircraft as well as an Aircraft On Ground (AOG) Line Maintenance Facility (LMF) for Global aircraft.

As an Embraer Authorized Service Center, Duncan Aviation-Provo will provide support for the Embraer Legacy 600, Phenom 100 and Phenom 300 aircraft.

The Duncan Aviation team, which will consist of about 25 technicians experienced in Bombardier and Embraer aircraft, will provide full airframe services including major and minor hourly and calendar inspections as well as pre-purchase evaluations. Duncan Aviation-Provo will also offer line-level engine, avionics and interior support.

Some transfers have already been announced. They include the following:

If you would like more information about the Provo facility or would like to be one of the first customers at Duncan Aviation-Provo, please call Alan Huggett in Battle Creek at 269.969.8400 or Brad Homeyer or Brad Lennemann in Lincoln at 402.475.2611.

«Previous: Todd Duncan Download
»Next: Shrinking the World for our Customers