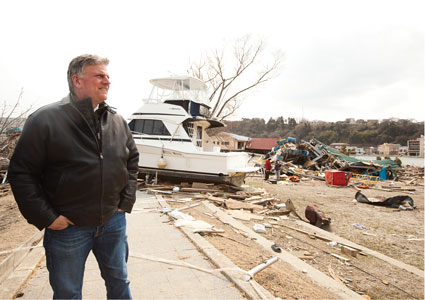 Through more than thirty years of earthquakes, hurricanes, wars and famine, Franklin Graham has led Samaritan’s Purse, helping meet the needs of people and sharing a Christian mission.

“We are a non-denominational relief and development organization” states Franklin, “with a goal to help people who have fallen in the ditch along life’s road.”

The Bible story of the Good Samaritan helping an injured traveler gives Samaritan’s Purse a clear mission to help those in need. Their emergency relief programs throughout the world provide prompt and efficient assistance to victims of devastation and a chance to rebuild their lives.

Many supporters make it possible for Samaritan’s Purse to provide for those in need. However, Franklin explains, general aviation is one of the biggest reasons they are able to make it all work.

“I was immediately impressed by its size, courtesy and how efficiently things operated.”

As a young man in 1971, Franklin attained his pilot’s license, not knowing at that time just how important aviation would become in his life’s work. He has been flying for 40 years now, 30 of which he has been a Duncan Aviation customer.

“On my first trip to Duncan Aviation, I was flying cross country in a Cessna 180 when I landed in Lincoln for fuel,” says Franklin. “I was immediately impressed by its size, courtesy and how efficiently things operated.”

For many years, Franklin would stop at Duncan Aviation for fuel when he was out traveling, always remaining impressed by what a facility in Lincoln, Nebraska, could offer.

Then there came a need to purchase an aircraft for the Boone, North Carolina, office of Samaritan’s Purse. Franklin found a Falcon 50, but wanted another set of eyes to help him assess the aircraft. He thought of Duncan Aviation first.

Franklin had always been awed with the many things that Duncan Aviation offered to an operator and assumed that the Aircraft Sales and Acquisition team would surely offer the same courteous support. He says he was not disappointed.

“Whether you are buying or selling, Duncan Aviation is very helpful, honest and up-front.”

“Purchasing an aircraft is complicated” explains Franklin, “but having someone who knows what they are doing makes it so much easier.” Franklin worked with Bob McCammon, Duncan Aviation Aircraft Sales Representative, through an assessment of the purchase and in 2004, Franklin purchased that Falcon 50. “Bob was very professional and extremely helpful,” states Franklin.

“We found that every year or so we would make an upgrade to the plane,” says Franklin. “Because we have always been happy with the work that Duncan Aviation provided, we continued to come back.”

In late 2010, Franklin saw opportunities in the market. He decided to sell the Falcon 50 and look for something that could offer him more efficiency. He returned to Duncan Aviation, this time working with Bob and Rene Cardona, also an Aircraft Sales Rep. Franklin purchased a Falcon 900EX which offers him more range and operational flexibility.

“Bob and Rene are two well-qualified, knowledgeable gentlemen,” says Franklin. “They conduct themselves very professionally and are never pushy.”

Franklin explains that in his experience, lots of times salespeople are over-eager, “but that is not what you have at Duncan Aviation,” says Franklin. “Whether you are buying or selling, they are very helpful, honest and up-front.”

Throughout both the sale of the 50 and the acquisition of the 900EX, “Bob and Rene did a great job and I thoroughly enjoyed working with them. They are great men,” states Franklin.

Bob says he, too, enjoyed working with Franklin. “He did the research and saw the opportunity the market presented.”

“Franklin has been flying for a long time,” Bob continues. “I found him to be a really sharp guy, down to earth and eager to speak with the team and tech reps assisting with the pre-buy.”

“Franklin has such a professional approach to everything,” says Rene. “He was involved in all facets of the acquisition process and displayed knowledge of general aviation that was apparent to us all.”

Franklin says the Falcon 900EX has quickly become a huge part of the ministry. Just a couple of months ago, during one of Franklin’s trips to North Korea, he had Greta Van Susteren of Fox News aboard the Falcon. This was her third trip to North Korea with Franklin.

And last winter, Franklin had the ABC Nightline crew on the Falcon during one of his trips to Haiti. “I find the aircraft not only gets me on location quickly,” explains Franklin, “but allows me to take people along…people of influence, who can help make a difference in the area of the world where I am working.”

“Duncan Aviation will take care of you wherever you are in the world.”

“Everyone I have ever worked with from Duncan Aviation has been professional. At Duncan Aviation they have high quality people, with high standards and excellent work ethic,” says Franklin.

With Franklin’s demanding schedule, most maintenance events with Duncan Aviation are led by Samaritan’s Director of Maintenance, Jeff Sanders.

“The Duncan Aviation teams have developed a great relationship with Jeff,” says Bob. “Working through the sale of the Falcon 50, the acquisition of the 900EX and other maintenance events over the years, Jeff literally becomes a part of their team while he is on-site.”

“I have found that Duncan Aviation’s help is not just available in Lincoln or Battle Creek. They will take care of you wherever you are in the world,” says Franklin. He goes on to explain that there were a few times while traveling, when they had issues with their aircraft and Duncan Aviation was there to support them.

“We were en-route to China and North Korea last year and had stopped in Kalispell, Montana, with an issue. We called Duncan Aviation, who quickly asked that we bring the aircraft in. We landed in Lincoln at 9 p.m. and by midnight it was fixed. We were able to take off early in the morning and continue the trip without further delay.”

“On another occasion, we were overseas and needed a part. Duncan Aviation was able to get it shipped into Nairobi, Kenya, within just a couple of days. We were able to put the part in and continue with the trip, once again without major delay.”

“Aviation is a huge part of allowing us to respond effectively and in a short period of time, worldwide.”

Franklin says that when you are a customer with Duncan Aviation, it is a partnership. He saw this first-hand during this past year when the earthquake and tsunami devastated Japan. During this time, Samaritan’s Purse was working with Duncan Aviation through the sales and acquisition process.

The support was outstanding. Working with the United States Air Force, Duncan Aviation and many other supporters, Samaritan’s Purse sent pallets containing blankets, heavyduty plastic, hygiene kits, soap, buckets, and jerry cans. They were delivered promptly and transported to a Sendai rescue center within just a few days.

Samaritan’s Purse was the first non-government organization to respond. “To be able to come in within hours, to show compassion, show love, and for me, as a Christian, to share with the people of Japan the hope that I have in Jesus Christ was truly amazing,” says Franklin.

“It was a great incentive for us to have a partner like Duncan Aviation who gave their name and shared some of their resources to help the people of Japan,” he continues. Franklin has devoted his life to meeting the needs of people like those in Japan and around the entire world. Under his leadership, Samaritan’s Purse has met the needs of poor, sick and suffering people in more than 100 countries.

Whether it is here in the United States, assisting after a hurricane like Katrina or the recent tornadoes in Joplin, Missouri, and Tuscaloosa, Alabama, or in far away countries such as Haiti, North Korea and Japan, Samaritan’s Purse responds with open arms.

“When there is a crisis in the world, it is important for us to get there quickly,” says Franklin. “Aviation is a huge part of allowing us to respond effectively and in a short period of time, worldwide.”