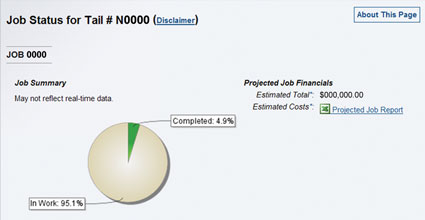 On January 23, 2011, a Challenger 604 landed at W.K. Kellogg Airport in Battle Creek, Michigan. Jim Milardo, Maintenance Director for Great Point Advisors, accompanied the aircraft to Duncan Aviation. The Challenger, scheduled for a 2400 hour and 24-month airframe inspection, had an expected downtime of 16 days.

Jim was greeted by Project Manager Jerry Tollas and led to a small conference room for a meeting. The debrief lasted about an hour. Plans were reviewed and incoming squawks were communicated to the teams. Jim was set up on myDuncan.aero and the project was a-go.

Jerry comments how quickly Jim took to the application. “I set up his account, which sent him an email with a user ID and password. He followed the links and away he went,” he recalls.

Just hours later, Jim departed from Duncan Aviation, leaving the Challenger 604 in the capable hands of the Duncan Aviation technicians. Jim did not come back to Duncan Aviation during this project. He didn’t have to. “I kept track of the progress, approved items remotely and even delivered the aircraft, all from my office,” states Jim.

myDuncan made this possible. It is a free service, uniquely developed and maintained by Duncan Aviation’s Information Technology teams. It serves customers to enhance overall experience. It improves communication, efficiency and accessibility whether a customer is on-site or not.

For Jim, who was not on-site for this project, myDuncan meant that he was able to manage the project from home while still taking care of his other aircraft. “I was able to access the project through myDuncan at any time and do real-time approvals without having to be on-site,” explains Jim.

myDuncan streamlines information, organizing it for customers. The process involves a minimum of paperwork and can be accessed from anywhere with an internet connection. Through the system, e-mails alert customers to item updates and icons indicate when new items have been posted or when messages are added. With paperless approvals, items are grouped, making it easier to manage lists. Customers can work through items at their own pace and comments allow customers to post questions and notify their project managers of decisions.

According to Jim, the paperless approval process worked flawlessly. “I would read the squawk and if I needed more information, I could email Jerry for more details and even pictures if needed,” explains Jim. “Then I could make a determination whether to work the item or not…it is just that simple.”

New in 2010, Job Status Reports track a project’s current standing and represent the data through charts and projected financials. Jim says he appreciates the “work in progress” charts the most. These indicate the number of hours for items that are in work and their completion status. In addition, projected financials represent a general cost estimate and can be downloaded in an Excel file by the customer.

“I like that I can keep track of real-time cost, so I know where we stand in relation to the quoted pricing,” Jim says.

In addition to Job Status Reports, project managers can provide detailed status reports unique to the customer’s needs. Jim says that Jerry will provide him a report for anything that he needs. The ability to create these reports is simple, providing project managers the ability to report statuses on specific work orders and even progress with key items.

As a project progresses, customers like Jim can use the project contacts feature to e-mail key contacts such as project managers, tech reps and team leaders. These contacts can then be saved as a personal contact in a customer’s profile and will be available for use during their next maintenance event.

myDuncan Adds to the Duncan Experience

Jim was impressed not only by myDuncan.aero and its ease of use, but also the “good work ethics and great pricing offered by Duncan Aviation.”

“I would recommend Duncan Aviation to any of my counterparts,” states Jim. “myDuncan is a very handy tool that makes my job easier.” His advice to other operators is pretty straightforward: go to Duncan Aviation and take the time to learn how easy myDuncan.aero is to use.

“The reduction in costs is huge,” Jim says. “Instead of spending time in a hotel room or service center, it frees me up to do other things while at the same time managing the work at Duncan Aviation.”