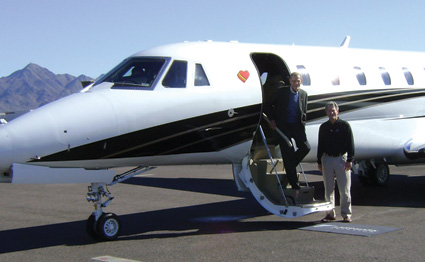 In 2004, Doug Stussi made his first call to Doug Roth, Aircraft Sales and Acquisition Representative for Duncan Aviation, to inquire about the purchase of an aircraft. Doug Stussi is Executive Vice President and Chief Financial Officer with Love’s Travel Stops and Country Stores out of Oklahoma City. At that time, Love’s, now the second largest travel stop chain in the United States, decided to officially enter into aviation. Their stores were expanding rapidly and their mission required a more efficient means of travel for the business. In that year, they purchased a Citation Ultra. It was the first of four aircraft purchased in partnership with Duncan Aviation and Doug Roth.

Love's has more than 265 locations in 39 states. Their goal is to visit each location three times a year.

Love’s Travel Stops is family-owned and operated, much like Duncan Aviation. They, too, take pride in their family history. Founder and Chairman Tom Love and three of his four children are heavily active in the business, making several trips a year to more than 265 locations throughout 39 states. Doug explains that for the Love family, it is imperative that their faces be in front of not only the general public and their customers, but their team members, as well.

"If you traveled to any Love’s location, it would be unusual to find an employee who has not met a Love family member," he says. In addition, the Love’s Senior Management Team also has made it their goal to visit each location three times a year. When these are your values and your goals, "you’ve got to have an aircraft," Doug states.

Family ownership means a lot to the Love’s team. "When working for a family-owned company, they are much more long-term in their focus because they are building value in the business for their family," Doug says. He appreciates working for Love’s because "they live their family values and their personal values in the way they run their business."

Doug says he can see that alive at Duncan Aviation as well. He has partnered with Doug Roth and Duncan Aviation through four aircraft acquisitions and the sale of one aircraft. "I was hooked the first time we did business with Doug Roth," he says. "The level of customer service, stick-to-itiveness, get things done attitude and attention to detail is what stood out to me that first deal... and what has kept us coming back each time."

Both Dougs are very analytical and have a keen ability to work through options and ask the right questions. Doug Stussi describes himself as a "bean-counter type of accountant," so someone who exemplifies attention to detail and follow-through is very important to him. "Doug Roth does all of those things," he says, "so once hooked, we’ve stuck with him."

Doug further explains by stating, "Doug Roth really sets you up to negotiate a fair price by working through to analyze the value of all the different aircraft that are in the market so that you can come up with a true comparison of the options out there."

Doug Roth sees his knowledge and analytical nature as imperative to the long-term working relationship he has formed with Love’s. "In-between aircraft transactions, we stay in touch," he says. "I supply them with updates on the market so they can consider their options for future aircraft as their needs change."

Near the end of 2010, their needs did change and Love’s Travel Stops looked to expand their fleet once more. With locations in Washington state, New Jersey and Florida, the need to purchase a larger aircraft was really a "mission need" purchase. "We needed to go greater distance with more folks on board," Love’s Doug says.

Duncan Aviation’s Doug supplied them with performance and operating economics on a couple of different models so they could determine the best model that would fit their needs. They looked into Falcons and Citations. Doug Roth says, "The best value for them met a balance between model year, total time, ownership history and price." They have always been really happy with the Citation aircraft; in fact, their entire fleet is Citations. So taking a look at range and capacity, they finalized on a Citation Sovereign. "We can fill it up and go to the outskirts of our market areas in one stop," notes Doug Stussi.

The efficiency of "one stop" ties directly to how Love’s feels about Duncan Aviation’s family of services. With each aircraft purchase, additional maintenance and completions have been provided.

Duncan Aviation's people do the right thing, are fair and strive to build long-term partnerships with customers.

Once the Love’s family selects an aircraft and just before the pre-purchase inspection, Duncan Aviation’s Doug meets with them. "They take a look at the aircraft and we determine what upgrades they might want to consider," he says. Their first Ultra needed new paint and a new interior. Their most recent acquisition showcases Duncan Aviation cabinetry and carpet.

Doug Stussi appreciates this kind of service. "Duncan Aviation’s people have the skill and expertise to know the quality of the airplane," he says. "Then they provide you with an opportunity to modify it right on-site." The personalization provided by these sorts of upgrades makes it possible for them to take possession of an aircraft that is not only theirs legally, but that feels like theirs emotionally.

Love’s Doug recommends the hassle-free aircraft acquisition service through Duncan Aviation to others. He says to any business thinking of purchasing their first aircraft: "Work through the math, analyze the pros and cons of fractional ownership, and if the right decision is to buy an airplane, I recommend Duncan Aviation... They provide a great experience."

He also comments on similarities between Love’s and Duncan Aviation. "Doug and I are both fortunate to work for family-owned businesses whose families are value-oriented and ethical. They do the right thing, are fair and strive to build long-term partnerships with customers."

«Previous: Jeff Duvall: Home Again
»Next: How to Extend the Life of an Aircraft Interior