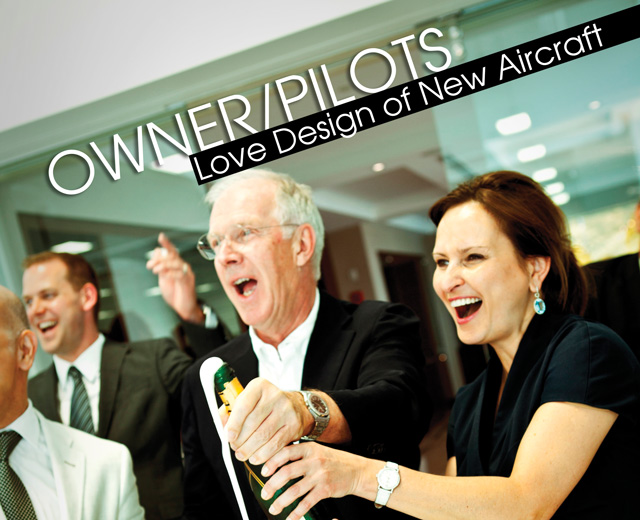 Most business and private jets are white with a stripe or two to complement the interior and are a nod to the owner’s preferences or the company’s branded colors. A white base is a practical option because it keeps the jet cooler when sitting on the runway, consequently reducing fuel evaporation. It’s also easier to maintain. But in a world where customers can view exact renderings of what their paint scheme will look like and a paint team that’ll take on almost any challenge, deliveries from Duncan Aviation’s paint bays are getting creative.

Of course, it takes creative owners to dream up something as alluring as the head-turning paint illusion Duncan Aviation applied recently to a large, long-range business jet. Ernst and Nataly Langner, owners and the pilots themselves, fit the bill.

They approached Duncan Aviation in 2012 about the paint scheme. Their aircraft would arrive at Duncan Aviation’s Lincoln, Nebraska, facility green, straight from the factory. They commissioned Artist Wilfrid Buch to design the paint and handed it off to Duncan Aviation’s design team to apply the artwork to a nearly 100-foot-long aircraft.

“WHEN WE FIRST STARTED LOOKING FOR A COMPANY TO PAINT OUR GLOBAL 5000, WE IMMEDIATELY THOUGHT OF DUNCAN AVIATION.”

“We had nearly a year to plan the process for this paint scheme, and we used up much of that to ensure we had exactly what we needed before arrival,” explained Designer Rachael Weverka. “We had to reverse-engineer the artwork, so we were thankful we had that additional time.”

Rachael says interpreting the 2D paint scheme caused the design studio and the paint team to think a bit outside the box. The team decided they needed to change the initial art a bit. One color wouldn’t give it the three-dimensional appearance the owners were looking for, so they opted for four very similar grays.

Rachael said the Langners were on board with the design team from the very start and had full confidence in Duncan Aviation’s changes, knowing it would lead to a better product.

“When we first started looking for a company to paint our Global 5000, we immediately thought of Duncan Aviation,” says Nataly. “The designers were very creative in determining out how to accomplish this very intricate pattern, and once we saw what they could do, we knew we had made the right choice.” 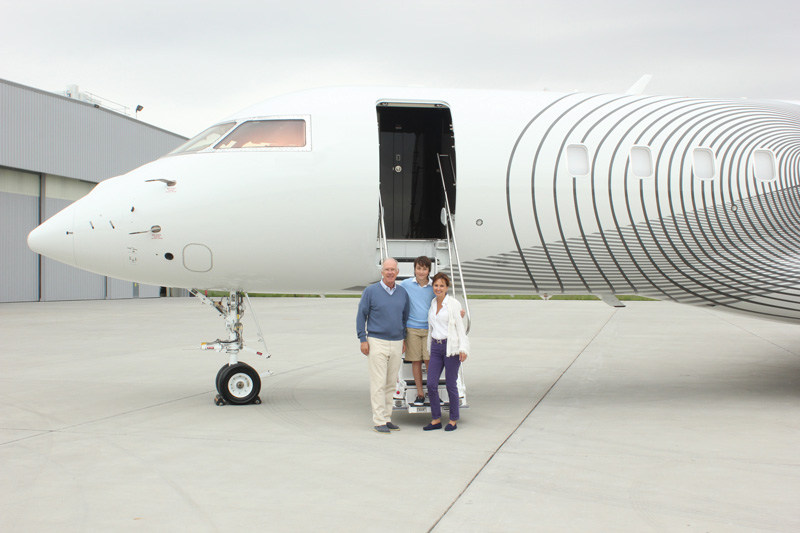 Ernst and Nataly Langner with their son Alexander on delivery day.

As soon as the aircraft arrived, the paint team hit the ground running. They weren’t certain exactly how long the process would take, as the aircraft needed yards and yards of tape applied, four colors added and days of detail work to ensure a perfect result.

“Duncan Aviation went out of the way to deliver the aircraft on time and with top-quality work,” says Nataly.

The Langners say they are pleased with Duncan Aviation’s exceptional customer service, which extended beyond the initial delivery date.

“Because our complicated design required some extra work and some follow-up touch-ups, we don’t think we could have found a better company to work with,” says Nataly.

The Langners were familiar with Duncan Aviation’s paint process from past projects. Yet they were still impressed with the results.

“The design team understood from the first moment how the end product should look,” says Nataly, “And after several modifications, they were able to deliver the most spectacular aircraft we have ever had.”

And spectacular was the goal.

“It certainly turns heads in any airport where we land,” she says.

«Previous: Paint. Unlike any other.
»Next: Double Take Design