Paint. Unlike any other. 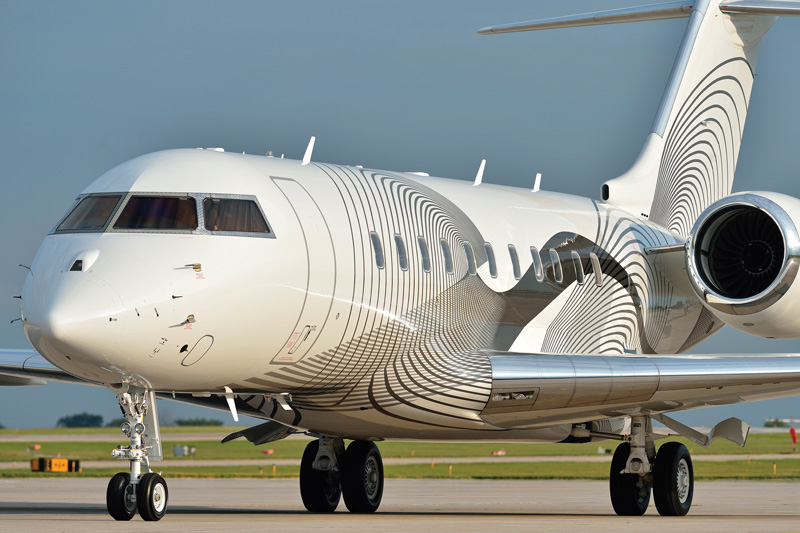 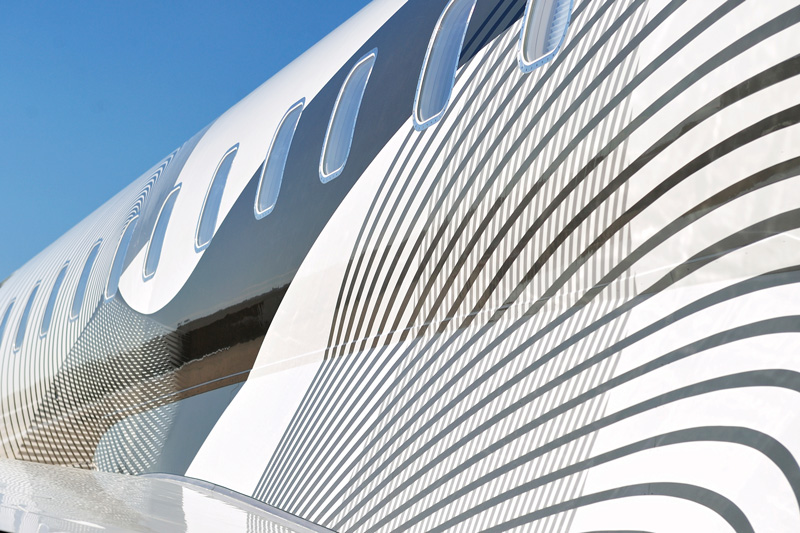 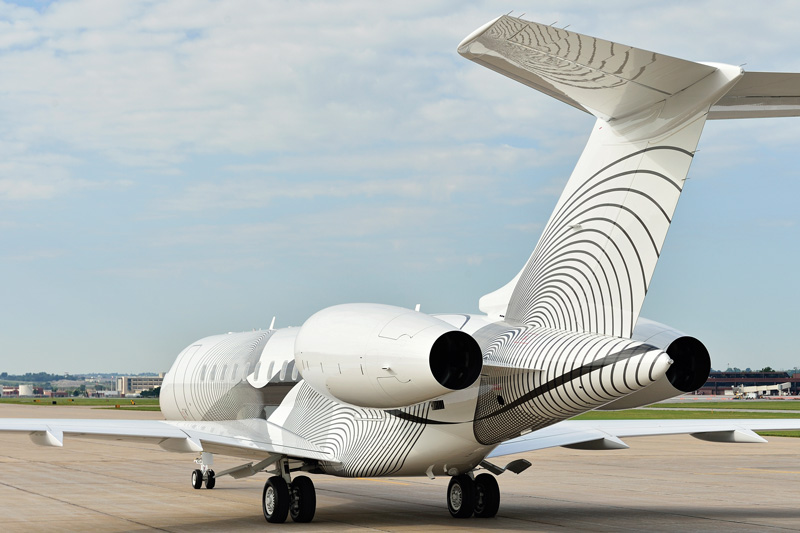 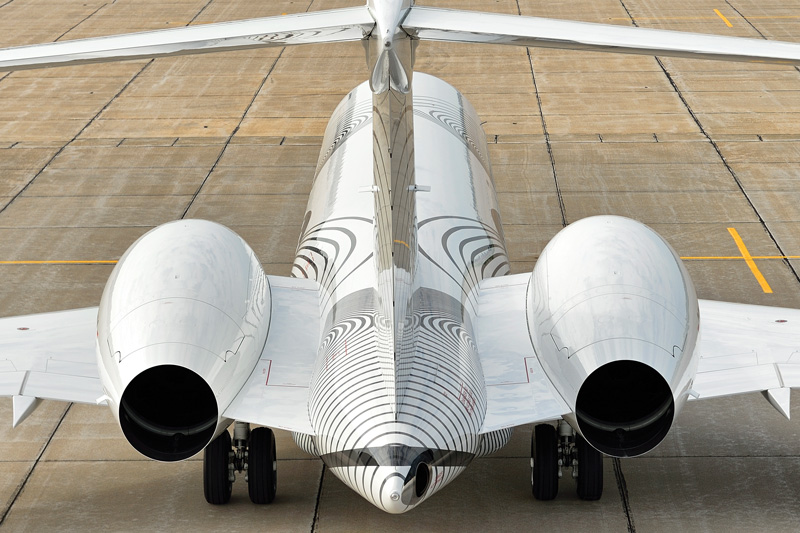 At least 150 pairs of hands worked on this large long-range business jet during the five weeks it spent at Duncan Aviation’s Lincoln, Nebraska, facility while receiving a gorgeous and unique paint design. Those hands spent nearly 2,500 hours ensuring every square inch of this creative and detailed paint scheme was applied perfectly. Those hours are backed by hundreds of years of experience spent crafting a skill that relies heavily on intuition. The result was, in a word, breathtaking. 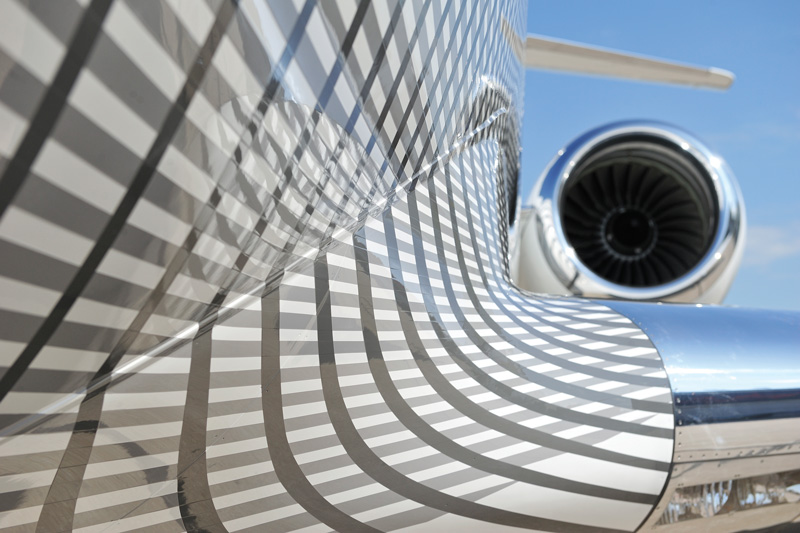 As soon as Duncan Aviation’s paint team saw the renderings of the custom scheme they were asked to apply to one of the largest aircraft the facility’s paint hangar has ever housed, the hallways bustled with excitement. The original design was commissioned by artist Wilfrid Buch and boasted countless lines swirling around the fuselage to create a psychedelic three-dimensional image. The job required talent, patience and an attention-to-detail that few paint technicians possess. And the project needed more than one paint team—everyone in the department needed to be on board.

In the past, Duncan Aviation’s paint shop had delivered everything from digital camouflage to vintage-inspired plaid jets, but never anything this complicated or on this scale. In fact, no one on the team had ever seen anything like it.

“The first thing the sales staff asked us was, ‘Can you do this?’ ” says Master Paint Specialist Stacy Finch, a 15-year Duncan Aviation paint veteran. “Our immediate response was, ‘Of course.’ We love a good challenge.”

The paint scheme didn’t lend itself well to a template or lasers, so the team completed the majority of the work by determining spacing based on landmarks along the jet. They eyeballed where they felt the lines should go, starting from the outside and working their way in.

“It’s a very intuitive process. We have years of experience working together and when we look at a paint job, we see the same things and think the same way,” says Master Paint Specialist Troy Reinke, who has been with Duncan Aviation’s paint department for two decades. “Sometimes one person tapes while the other stands back and gives direction. It’s really a team effort.”

Without a step-by-step guide, a lot of the taping was trial and error. It took nine days to complete taping on one side of the aircraft. Then, to ensure symmetry, the paint layout team lined the aircraft with paper, traced the tape lines and used the paper as a template on the other side.

It took two days to mirror the image on the second side before the paint team could apply the first color. A typical paint schedule allocates one or two days of taping on the entire aircraft, which is proof the detail in this job was astounding.

The original concept was one color, but Duncan Aviation’s design center determined there was no way to accomplish the level of depth the customer desired with just one color, so the team opted for four varying shades of gray and had to tape and paint until all four shades were complete.

All of this work, and a schedule that delivered the aircraft as quickly as possible, required the layout team to spend 40 straight days in the paint bay. And the aircraft wasn’t the only one at Duncan Aviation. The Lincoln facility’s paint shop simultaneously juggled five other aircraft in various stages of exterior paint application.

After completing the masking tape outlines, every team member available took a portion of the aircraft and helped fine-line tape it. The tedious work moved quickly with upwards of a dozen team members on the aircraft at any time. 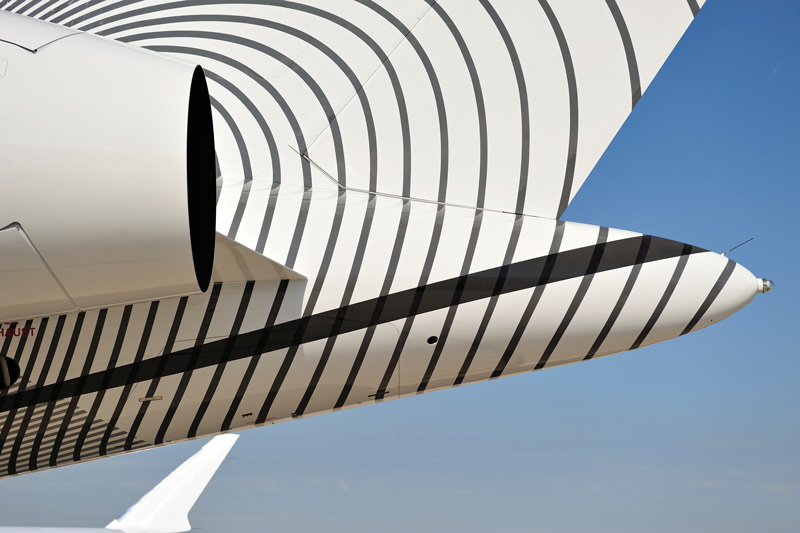 “It’s rare that we have so many paint team members working at the same time,” says Paint Manager Doug Bohac. “It has to be something pretty incredible for that many guys to work so closely for so many hours.”

This process was completed four times with each of the colors. The paint team clear coated the aircraft and sent it to the detail crew to ensure all the lines were exact, all microscopic bumps were nixed and every inch was buffed to perfection from tip to tail.

“You can imagine what it’s like to detail an aircraft of this size with that many lines,” said Project Manager Craig Boesch. “I would walk by the paint bay and return eight hours later and see the same guy in approximately the same spot, but then I looked at what he was doing—the detail, the exactness—and I realized he was moving fast.”

Because the team was uncertain how long the process would take, the paint department gave the customer a rough estimate of five weeks, and the aircraft was delivered within a few days of the projected out-date.

“When taking on a project like this, even with all the hours put in and sacrifices made, the paint team is motivated and inspired by the result each time,” says Doug. “It’s such a transformation, and that’s what keeps us coming back, day in and day out.”

«Previous: From the Chairman Spring 2014
»Next: Owner/Pilots Love Design of New Aircraft