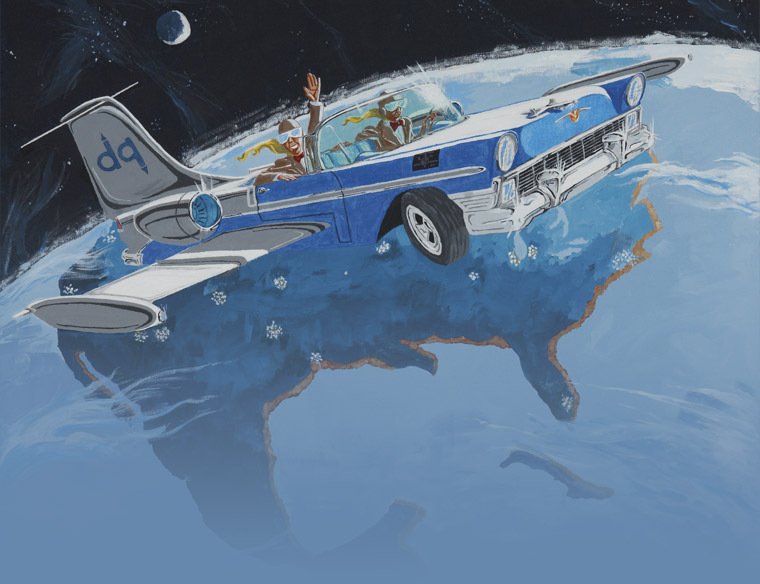 This spring, Duncan Aviation’s Marketing Communications team sent a Call for Entries to all Duncan Aviation team members and their immediate families with a flair for the artistic. We solicited various works of art that talked to the heritage, spirit and livelihood of Duncan Aviation in any artistic medium the artists chose.

We were so pleased with the abilities, creativity and spirit of our team members that we wanted to share their creations with the rest of the business aviation world. Here are our submissions for Duncan Aviation’s Chart-Topping Art Show.

From Sports to Space (above)
— Bill Prior

Bill Prior has been drawing since he was a kid, using a pencil to create sports scenes and superheros. Although his choice of subjects has changed over the years he still prefers to use a pencil. His proudest moment was when a cartoon he created was published by the Rossette, a Lincoln-based guitar enthusiast newspaper that is no longer in circulation. His art was encouraged and influenced by his father, who was into photography and painting. It was this painting influence that helped him create his submission.

When Bill approached this project he knew he wanted to mesh Duncan’s past with its future. Bill knows a thing or two about Duncan’s past having been with the company for 29 years, currently in Avionics as an Instrument Technician Gyro I. But how do you bring together the grassroots Midwest background, the Learjet (Duncan’s first airframe distributorship), the 50th anniversary Chart-Topping Road Show theme and the limitless boundaries of Duncan Aviation’s future? Well if you are Bill Prior you create Duncan Universe. Bill’s painting gives you a “sky’s the limit” view from the cockpit of ’56 Bel Lear – that’s the front end of a ’56 Bel Air and the tail section of a Learjet. As Robert and Todd fly over they see the United States landscape peppered with white dots representing all the places that Duncan has a presence, including a small dot for Clarinda, IA — where it all began.

What’s wrong with two green lights? You only need one to proceed through an intersection. But in the air, that is not good enough. In fact in most cases, the pilot must wait until he/she sees three green lights. This triple-assurance indicates the landing gear is down and in proper position to land. If you try to land with anything less than three green lights then you get something similar to this sculpture. Teri Nekuda and Mark McCall combined their creativity to create a sculpture from bent props.

This is not the first sculpture that Teri has created. If you were to drive past her home, you would see a dragonfly in her yard made out of rusty scrap medal. In the future you may see copper chandeliers hanging from the trees in her backyard. Her inspirations are drawn from her surroundings and experiences, which she puts to good use when working with clients in the Design Center in Lincoln.

Teri invited Mark from the Sheet Metal Shop into the creative process to assist her in construction of her design. Working together over several weekends, they created a garden sculpture that when securely positioned in the ground will spin when the wind blows. 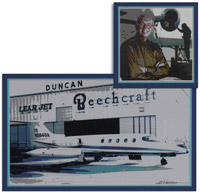 Melodie Stohlman does not create pictures, paintings or art pieces. She creates stories communicated through different media that tell a different story to everyone who gets the opportunity to appreciate them. This is how she approaches her creative process. Her work tells a story with the plot often times changing in mid-stream.

Melodie has always had a love of art but it wasn’t until two years ago, at the age of 54, that she took a bold move and opened her own art studio in Louisville, Nebraska. “It’s never too late to change.” It really frustrates her to hear others say they are too old to do something different. It is her desire to live her life as a testament that change is good at any age.

Through a series of computer art, she tells the history of Duncan Aviation’s transition from the humble beginnings of a Beechcraft distributorship under the leadership of Donald Duncan to the visionary values of Robert Duncan that transformed Duncan Aviation from good to great, to become a state-of-art aircraft service provider with more than 1,900 employees. The successful navigation of these transitions was accomplished through embracing change as it comes. Melodie isn’t the only artist in the Stohlman family. A daughter, son, and son-in-law are all accomplished artists in varying media. Even Melodie’s husband, Lyle, Director of Flight Operations, is pretty good at handling a paintbrush and easel.

When Alisa Rabe heard the story of how Duncan Aviation started as a car dealership and then soared into an aircraft business in Lincoln, she was inspired to create a series of digital photos as a tribute to Duncan Aviation and its 50 years of hard work, dedicated employees and future possibilities. “I’ve always liked the idea of representing meaningful things symbolically through artwork,” says Alisa. By combining the photos she hoped to capture a representation of the dream 50 years ago with the reality of Duncan Aviation today.

She carries her digital camera with her almost everywhere taking pictures of everything (which drives her husband, John, in Lincoln’s Avionics Line Department, crazy). Her creativity doesn’t stop with digital photography, Alisa also likes the Japanese art of folding paper — origami. One of the pieces she is most proud of is an American flag created with 500 origami cranes, all of which were hand-folded from 500 one-inch pieces of paper. This was given to a high school friend whose husband was killed in the Iraq war. 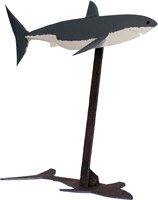 It all started two years ago with half a prop and the comment, “Hey that looks like a shark.” Armed with almost 18 years of experience in Duncan Aviation’s Lincoln machine shop that is exactly what it looked like when Curt Wilhelm got done with it, teeth and all. This initial Great White carcharias design was finished in time for Duncan Aviation’s United Way auction in 2005. Curt enjoyed the creative process so much that he wasted no time and began work on his next “prop shark.”

In order to give his second prop shark a more realistic appearance, Curt did a lot of research. It is this careful research that allows the casual observer to believe he or she is looking at an actual shark. It is not until upon closer inspection they discover it is not.

It may have started with half a prop and a comment but it won’t stop there. Curt has plans to create a longer (nearly 8 foot) shark, a scarecrow, and possibly a moray eel out of a prop that was twisted into a double bend when an airplane had a hard landing.

Will his art medium expand beyond props to other aviation castaways? “You bet,” says Curt. Where others see aviation scrap metal, as long as he has his saw, sander, and grinder, Curt is always asking, “What can I make out of that?”

Past to Present
— Erin Eckert 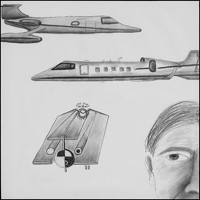 With her future squarely in front of her, Erin Eckert, daughter of Robert Eckert (Certification Engineer II-BTL), took a look back when creating “Past to Present” for the exhibit. Through the eyes of a recent high school graduate you see Donald Duncan in deep thought contemplating the future of the aviation company that he began 50 years ago. But looking back did not get the company where it is today. It was visionary thinking and hard work that has made Duncan Aviation an industry leader. That is what Erin wants others to see when they look at her drawing. The artwork brings together Duncan Aviation’s past with the present through the graphite rendering of two generations of Learjet and the “morphing” of the current Duncan logo into the 50th anniversary logo.

Erin knows that you have to look back occasionally to appreciate the present and make plans for the future. Her future plans are to attend Kellogg Community College and major in Radiography with hopes of working in a hospital.

Jeff Trumble doesn’t believe in throwing anything out when it comes to old, outdated aviation parts. Jeff, along with the help of his brother Andrew (Fuel Team-LNK), created the perfect gift for the man who has everything and has spent most of his life in or around the aviation industry, their dad, Thomas Trumble.

The inspiration behind their art piece was to create something meaningful for their dad in design using parts relevant to the aviation industry and that would utilize the skills and abilities they use daily while at work at Duncan Aviation. They settled on an art piece they titled “Useful Aviation.” It features a highly polished prop and 24K gold plated spinner. It is useful because they included a clock and atmospheric gauges also trimmed in 24K gold.

Are there future plans to create more useful aviation creations? As a matter of fact, Jeff is considering making an office desk for his dad out of a rear horizontal stabilizer.

Paul Schumacher loves photography. As a senior Journalism major at the University of Nebraska-Lincoln, he is hoping to make it a career. This interest in photography began with an elective course in high school. Soon after, Paul had his own darkroom set up in the attic of his parents’ home, coming out only to take more pictures and then escaping back to develop his film.

Paul also likes simplicity. That is why he chose to photograph the Barbara Jean, a P-51 Mustang. “It’s a tough old bird — elegant and unpainted. The photo captures the classic history of the War Bird at sunset.” Since the photo was taken the Barbara Jean experienced a hard landing and sustained significant damage. However, by this time next year, she will be back in the air again according to Harry Bar, owner of the Barbara Jean.
Paul doesn’t limit himself and is willing to go anywhere for a shot. Destinations such as France, Barcelona and other exotic locations are captured on rolls and rolls of film. He wants to go where the pictures take him leaving nothing to impede his progress. 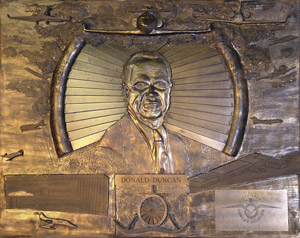 In 1980, Charles began building sand sculptures to entertain his five year old son while on the beach. This would be the unlikely beginning of a career that continues today. Beginning with just a pile of sand Charles discovered, through trial and error, a way to build tall sculptures without having them collapse. They soon found their way into newspapers, magazines and commercial endorsements.

In 2000 he decided to semi retire from sand sculpture and scale down his business in order to spend more time at home and in the studio. Today, he works for Duncan Aviation as a cabinet specialist and spends weekends and evenings in the studio.

The relief sculpture created for Duncan Aviation’s 50th anniversary is a tribute to the founder, Donald Duncan. Central to the piece, is a bust of Donald surrounded by aviation symbolism depicting some of the highlights of Duncan Aviation. Turbine blades form a sunburst that radiate from the center of the piece signifying not only the role of aircraft maintenance in Duncan Aviation’s success but also the company growth radiating from that success. Under the bust is a symbol representing the shops involved with Duncan Aviation’s success. The Latin words, veneratio (respect), officium, (duty to service), and prohitas (honesty) signify the commitment to customer service. The many circular depressions to the lower right and left of the bust represent the hundreds of faces behind the Duncan Aviation name. In the lower left corner is the original Duncan Aviation hanger with the Lear 23 and in the right corner is the current Battle Creek facility. The various airplanes represent the many types of aircraft that Duncan has serviced through the years. Finally, Donald Duncan’s tie clasp has a small telephone on it commemorating his talent for successfully conducting business on the phone.