Duncan Aviation in the Recording Studio 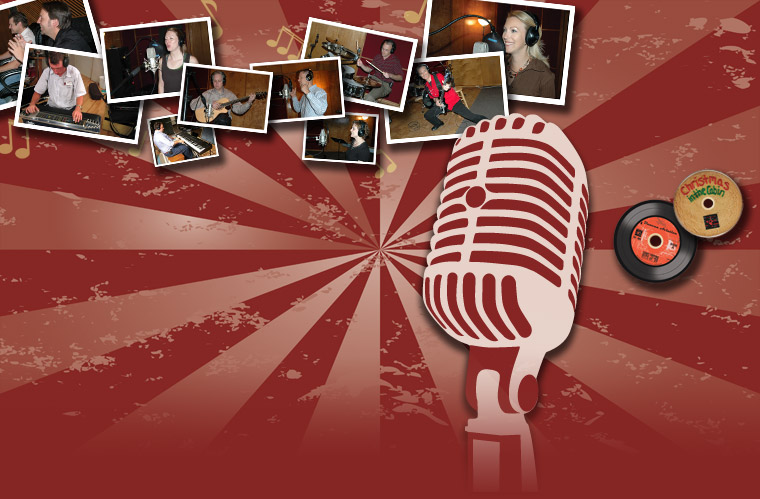 As Duncan Aviation began to prepare for its 50th anniversary year, the company searched for modern means to celebrate its beginnings. We began to put ourselves in the 1950s mindset. Music no doubt was at the core of the 1950s culture. From this stemmed the idea of Duncan Aviation producing a CD containing hits from 1956, the year the company began its journey on the road to success. The real thrill was that current Duncan Aviation team members would reproduce the music themselves.

Duncan Aviation employees jumped at the opportunity to cruise back to the 1950s to bring a few of their favorite “Chart Topping Hits of ’56” to the present. All of the instrumentals and vocals on the album are those of Duncan Aviation team members. And the CD was produced, edited and designed by Duncan Aviation talent as well. In the end, everyone was rewarded for their hard work and dedication when the CD became an instant hit with other employees, customers, vendors and the industry as a whole.

The Lincoln, Nebraska, chapter of the American Marketing Association thought it was a knock-out, too. Dedicated to the promotion and advancement of marketing within Lincoln, the Lincoln AMA annually recognizes marketing excellence with the “Prism Award.” On May 11, 2006, Duncan Aviation received the 2006 Prism Award for the “Chart Topping Hits of ‘56” CD at the annual award luncheon.

With the first CD being so well-received,
Duncan Aviation decided to do it again. Only this time, it is a Holiday CD with even more employee participants. “Chart Topping Hits of ‘56” involved approximately 40 team members in its production and the Holiday CD has close to 60. Team members from Lincoln, Battle Creek and even from our satellite shops had the chance to partake. Adding a choir group created additional opportunities for employees to share their musical talents with the industry.

The Holiday CD, “Christmas in the Cabin,” made its debut in the beginning of December. The rewards of the summer-long labor of love could finally be experienced. There is something odd about hearing “White Christmas” while asphalt puddles form on the street. And “chestnuts roasting…” are unusual words to hear while an inferno rages in your car.

In order to produce “Chart Topping Hits of ‘56” and “Christmas in the Cabin,” processes were put in place. They involved soliciting auditions, discovering unknown talent within Duncan Aviation, matching singers with musicians, recording the songs, editing and mixing, CD cover art design, production and printing, and distribution.

“Chart Topping Hits of ‘56” and “Christmas in the Cabin” were successful in putting Duncan Aviation’s name out into the industry in a nontraditional form of advertising. They have everlasting shelf lives, have reached people across the industry and made an unusual impression with customers and others in the industry. Both also became morale and team-building projects. They gave participants from different departments and locations a chance to work closely together, learning more about each other outside of the work environment. This in turn helps to build friendships and teamwork, strengthening the skills and camaraderie needed to best take care of our customers.