Cutting Corners – Especially on a Proposal – Can Be Expensive 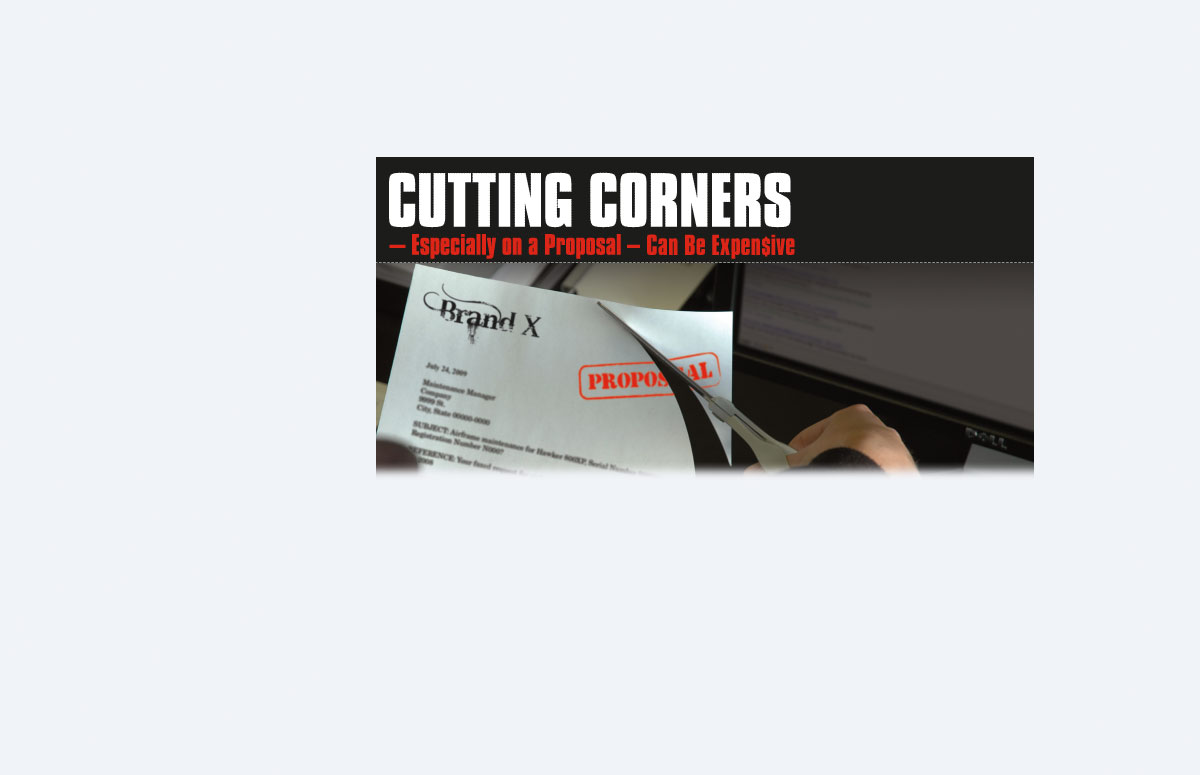 The difficult economic circumstances we have seen so far in 2009 have had an interesting effect on those of you who manage maintenance and service for your company’s business aircraft.

For one thing, aviation maintenance facilities are competing like never before to be your aviation service provider. This competition has left many providers desperate to fill their slots, and slashed service pricing can equate to lower costs associated with running and maintaining your aircraft.

Because aircraft require about two hours of ground maintenance for every hour of flight, your aircraft’s service provider becomes an important member of your flight department’s team. If operators flip-flop between service providers merely on the basis of the bottom-line number they see on a proposal, they may learn a hard lesson: Facts, accuracy and comprehensive solutions often suffer in cut-throat, competitive conditions. And choosing the best value is so much more than picking the lowest number, especially if intangibles like trust and confidence are considered.

The most critical factor in the initial stages of negotiation for an aircraft project is the interaction and relationship between the service provider’s sales representative and the director of maintenance (DOM), pilot or CEO who represents their company concerning their aircraft. The eventual flow of work and cost of the project will, or at least should be, communicated in the proposal that results from these discussions.

There are many different types of proposals submitted to customers. The information communicated between the parties through the proposal ultimately will determine the quality and scope of the work as well as the success and cost of the project.

“A more comprehensive proposal always leads to more comprehensive service on the hangar floor and a higher level of quality because of better communication,” says Dan Fuoco, Duncan Aviation Hawker Service Sales Representative. “When a customer takes the time to put together a work scope list, they certainly deserve to see a proposal of equal or superior effort in return. Duncan Aviation always delivers that type of proposal because we understand the consequences to ourselves and our customers if an incomplete proposal is submitted.” 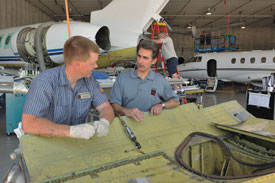 Fuoco relates a story about a 16-year inspection on a Hawker where he and Duncan Aviation lost the project’s bid because the customer looked at the bottom line number on a competitor’s single-page proposal. Fuoco had put together the normal, comprehensive proposal that Duncan Aviation prepares for prospects; it contained many pages of detailed information, specific quotes and an accurate bid. The CEO was the company’s decision-maker, and he only looked at the bottom-line numbers. Weeks into the project, Fuoco received a phone call from the upset DOM of that company. The DOM said that the bid they accepted neglected to mention many items that were required to perform the work scope. Interior access and x-ray charges were being added, along with other things that were never in their initial quote. The DOM said the costs were rising fast and were already past Duncan Aviation’s proposal, which had included those things.

“The customer made an incorrect assumption that the lower bottom-line bid on their proposal would save them money. This is almost never the case,” Fuoco explains. It was an expensive lesson for the decision-making CEO.

A detailed proposal, written in a professional manner, allows a prospective customer to truly compare facilities.

“Customers who receive an accurate and detailed proposal from Duncan Aviation always know what to expect as opposed to a single bid number for an inspection on one sheet of paper,” says Dennis Van Strien, Duncan Aviation Citation Service Sales Representative.

These intangibles vary with each customer but can include things like an aircraft’s resale value, 24/7 access to Duncan Aviation’s AOG Rapid Response services, future support of the most knowledgeable tech reps in the industry, and the dependability of having aviation professionals backing up every element of a work scope. These things are never written into a proposal. Those who look at the bottom-line number fail to understand these intangibles, but longtime Duncan Aviation customers rely on them and know that the intangibles often determine who ultimately gets the best deal!

Heath McDaniel, Aircraft Maintenance Manager for Michelin Tire, is a customer who understands the value provided by a Duncan Aviation proposal. Heath explains that he uses a simple matrix when deciding which service provider to use.

“QUALITY IS NEVER AN ACCIDENT; IT IS ALWAYS THE RESULT OF HIGH INTENTION, SINCERE EFFORT, INTELLIGENT DIRECTION AND SKILLFUL EXECUTION; IT REPRESENTS THE WISE CHOICE OF MANY ALTERNATIVES.”
–William A. Foster

“We rank service centers by quality of work, first; then downtime and finally cost of work scope,” Heath says. “We track individual expenses and we’ve found Duncan Aviation to be good at downtime estimates. This helps lower our cost of travel and factors into our decisions. Of course, no one can plan for the unseen.”

When Heath gets his proposal, he requires a “relatively accurate number” of what the project will cost. He does not appreciate itemized proposals with no total or inaccurate numbers. He says these types of proposals can lead to large cost overruns, and are often deliberately written that way.

Heath has the right idea. His matrix looks at quality first rather than price. And ultimately, that’s the reason a quality proposal is so important. It reflects on the quality you receive on the floor of your service provider.

Unforeseen circumstances, such as corrosion, cannot be planned for but play into Heath’s second criteria of downtime. A premier company such as Duncan Aviation knows how to minimize the impact of these types of unfortunate discoveries. And finally, the total cost of the work scope depends on the first two points and how a company manages their associated expenses.