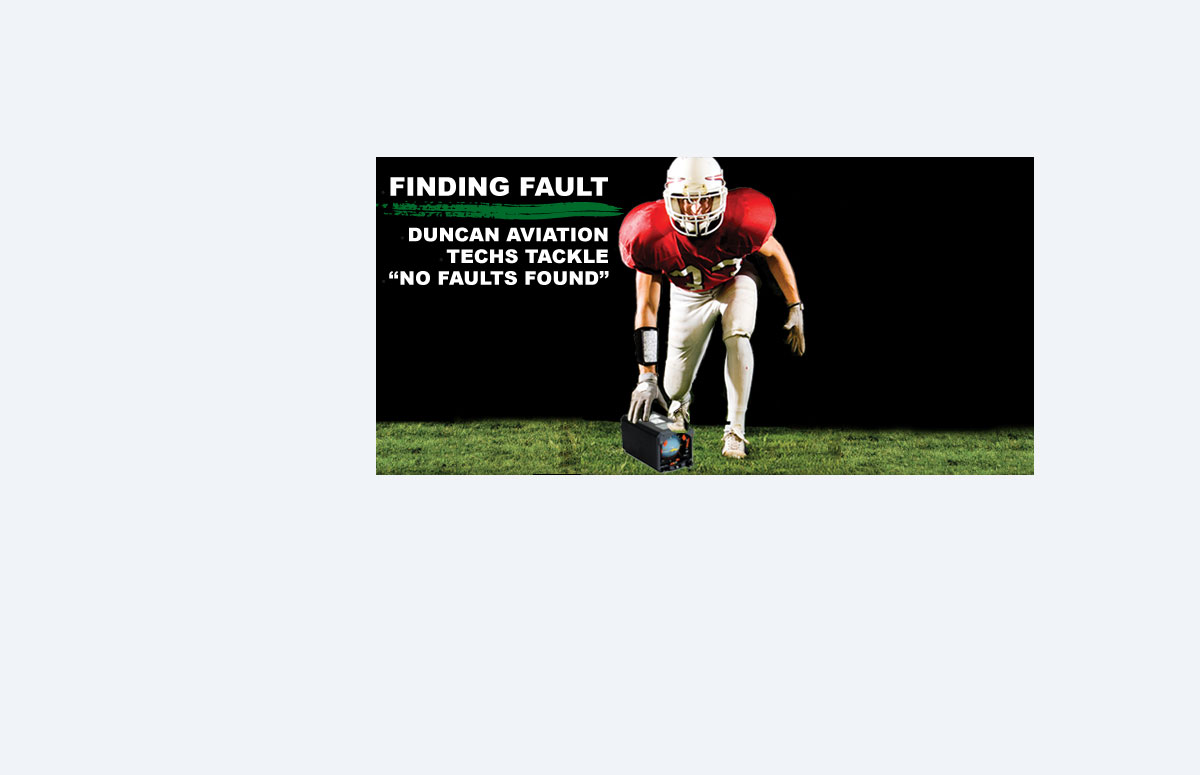 No one in the aviation industry likes to see an instrument or piece of avionics equipment labeled as No Fault Found (NFF). So Duncan Aviation technicians take great care to find faults.

Equipment is labeled NFF when the squawk it is sent in for cannot be duplicated in the repair bench environment. Additionally, many problems with avionics equipment and instruments are intermittent; the equipment doesn’t fail outright, it just periodically stops performing as needed. That makes diagnosis even more difficult.

Kevin Miesbach, Manager of the Duncan Aviation Avionics/Instrument Shop, estimates that between 10-25% of the components that Duncan Aviation receives are labeled NFF at a different shop.

So just how does Duncan Aviation tackle these diagnostic dilemmas? 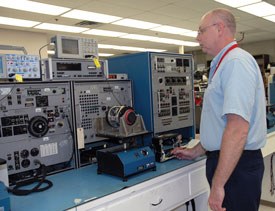 There are hundreds of years’ worth of experience among the talented and tenacious technicians working on gyros, weather radar, antennas, autopilot equipment, and navigation/communications systems sent to Duncan Aviation. Kevin believes that this experience is the main reason Duncan Aviation is known for its ability to resolve NFF problems. Because Duncan Aviation technicians are assigned to dedicated stations and work all day, every day, on the same types of components and instruments, they become familiar with even the most uncommon problems and failures.

Randy Bauer has worked at Duncan Aviation for 21 years. As the Gyro II Team Leader, Randy explains that a faulty gyro could cause wing rock. However, determining what’s wrong in a gyro isn’t that easy. “In the vertical gyro, wing rock may be caused by defective gimbal bearings, low liquid level, or free drift rates. And in rare instances, the directional gyro could cause the same wing rock discrepancy if it has defective gimbal bearings or if the free drift rates don’t conform to specifications.” 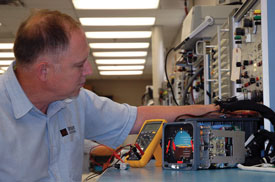 Ed McCranie works on a motor

Instrument Master Technician Ed McCranie celebrated his 33rd year at Duncan Aviation this May. Ed specializes in repair and overhaul of attitude indicators. Some of these indicators have a new replacement cost of up to $40,000, so repair is preferred. The motors used to drive the attitude and command displays in some attitude director indicator models have intermittent failures. If the motor fails just once every 300 cycles, that would prevent it from being acceptable for continued service. These parts are carefully inspected to minimize the chance of in-flight failures.

Duncan Aviation’s Avionics and Instrument Shop uses chambers that simulate the temperature extremes equipment experiences in flight. For instance, a weather radar antenna in an aircraft’s nose cone may experience 100-degree temperature swings from ground to altitude. To duplicate and diagnose problems, Duncan’s chamber can re-create those extremes (-40C to +70C).

Randy explains that all gyros are subjected to temperature extremes: They go through a hot (oven: 200 degrees) and cold (freezer: 20 degrees) soak to simulate the real-life temperatures the gyro may experience during flight or on the ground.

In addition, the shop houses an altitude chamber to simulate the changes in altitude and pressure that equipment undergoes during flight. And a vibration simulation re-creates the shaking and shuddering of an aircraft under various flight conditions.

Duncan Aviation also invests in the most current tooling and repair manuals. When Team Leader Nic Evans works on autopilot instruments, he uses a Duncan-developed automated test set called Date-1B. Instead of spending eight hours standing and monitoring the diagnostic test on a faulty autopilot, he hooks the unit to a computer for testing. While the tests are running, he’s free to work on other units.

Developed by Duncan Aviation’s Research & Development experts, the test set performs diagnostics and produces an analysis that Nic and his team use to pinpoint the problem. A major benefit of this automation is that it allows technicians to repeat lengthy tests many times in an attempt to duplicate intermittent problems that would normally take days to find, making this not only more cost effective but creating a higher probability that the fault will be identified. 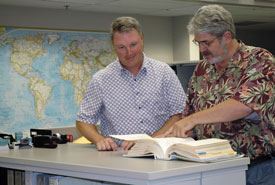 Duncan Aviation also has four Components Tech Reps who provide support for the Avionics/Instrument Shop by speaking directly to customers to help troubleshoot problems. Kevin says, “Parts may arrive with a tag that says, ‘broken’ or ‘doesn’t work’.” From that brief assessment, it’s very difficult for a technician to discern what’s wrong. Tech reps call the customer and talk through the problems he or she has been experiencing to help pinpoint the source of the malfunction.

Randy agrees. “If an aircraft is experiencing wing rock, we might suspect a faulty gyro. However, it might also result from the autopilot sending a faulty signal to the servo. If the customer simply sends in the gyro and says the problem was wing rock, we could work on that gyro for months and never diagnose a problem.”

UP TO THE CHALLENGE

Locating the true nature of problems with avionics and instrument equipment is not always easy. The technicians at Duncan Aviation go to great lengths using experience, knowledge, environmental and diagnostic testing equipment and sheer determination to find solutions to components problems and save customers time, money and frustration.

«Previous: Cutting Corners – Especially on a Proposal – Can Be Expensive
»Next: Placing Value on Peace of Mind