Improving Work Is A Constant Process 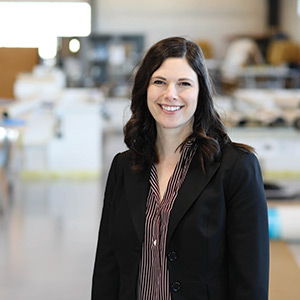 Business Process Manager Erin Hart recently celebrated her 10-year anniversary at Duncan Aviation at the Lincoln, Nebraska, facility. Starting as an Apprentice in 2007, she has worked in several departments and learned the aviation business from a variety of perspectives: Quality Audit, Customer Service, Marketing, and Government Projects.

While working in Customer Service, Erin had her first contact with Duncan Aviation’s customers, and she was able to connect how all of the regulations and policies she’d learned affect them. In 2012, while working in the Marketing Department, Erin was asked to join the relatively new LEAN team.

“Although many companies in the aviation industry have LEAN programs, we’ve modified ours to target areas that will be most beneficial to our customers and fellow team members,” says Erin. “At Duncan Aviation, LEAN stands for Listen/Engage/Advance/iNnovate.” 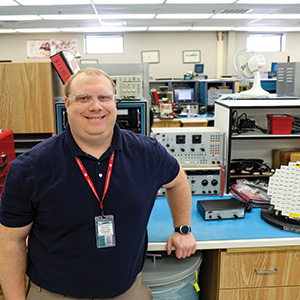 The LEAN team, working with Duncan Aviation’s IT Department, created a CIP (Continuous Improvement Program) database to which every team member at Duncan Aviation has access. Ideas come from throughout the company. Some are easy to resolve and implement; others require cross-departmental teams to assess and test.

Team members who submit CIP ideas are encouraged to problem solve, as well. They submit the challenge they are facing and their idea to improve it, and they tell how the change will benefit them, their team, and our customers.

Through the CIP database, the LEAN team sees all of the ideas. They research them, respond to the team members who’ve submitted ideas, and see how implementing the ideas would help customers or team members directly or indirectly.

“It just makes sense to listen to our team members,” says Erin. “They are best suited to improve their processes because they know their systems, and they have the ability to identify areas where there’s duplication or waste or where we can better serve customers.”

"The best part of my role is watching team members learn from one another and build stronger relationships in the process. It's inspiring to see team members and entire shops discover new ways to improve their processes, eliminate wasteful motions, and proudly share their successes with others." - Erin Hart, Business Process Manager

One of the ideas submitted by Battle Creek’s Return Goods Administrator Liz McBride was to make Project Managers’ contact information available at the Flight Desk so customers can notify them immediately upon landing.

After assessing costs and time, Duncan Aviation bought a business card holder and installed it in May 2017.

Several team members have suggested that we buy avionics equipment, test it, and store it to save time and money for our customers. Avionics Master Tech Chad Ladwig in Lincoln made a similar suggestion and dropped costs by more than $700 per unit. 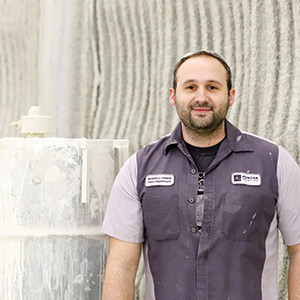 Some of the ideas submitted save team members a great deal of time, which ultimately saves labor costs for customers. For instance, Paint Master Specialist Russell Vanek lamented the fact that priming a large aircraft required at least two team members to mix the primer in numerous 5-gallon buckets. It took quite a bit of time and acetone at the end of each day to clean all of those buckets.

He proposed building a stand to hold a 55-gallon drum where the primer could be mixed by one team member. He installed a valve in the bottom of the drum and, using a large mixer, mixed up the primer. Because mixing the primer requires only one team member now, and there’s only one 5-gallon bucket to clean at the end of the day, Russell saved the company and its customers labor time and money because it takes far less acetone to clean one bucket as opposed to at least a half dozen of them.

Erin says: “Giving the team members, who do the work every day, the authority and responsibility to improve their work processes and environment is exciting to be a part of.”