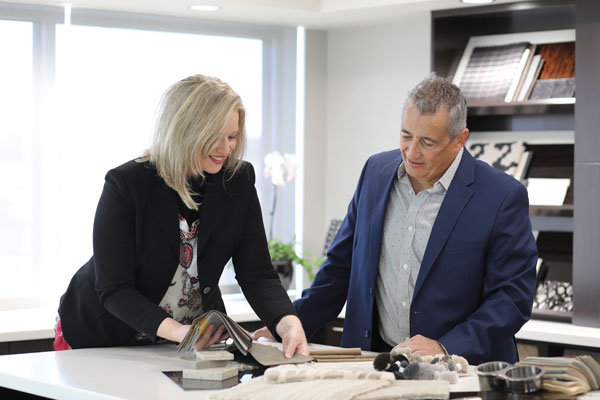 Rene Cardona pictured with Designer Carie Bruss in the newly remodeled design center in Lincoln. Many of the aircraft we help clients buy are turnkey and put into immediate service for the new owner. If the best aircraft is not exactly what the customer wants, our tip-to-tail services can quickly create the aircraft that is desired.

The day-trip to Duncan Aviation provided an opportunity to discuss running businesses, and the evening culminated with further discussions at Chairman Emeritus Robert Duncan’s house.

Several months later, one of the members of the YPO, the President of a company in Mississippi, decided he’d like to buy an aircraft.

“As with most buyers, he had some specific needs,” says Rene. “He wanted an airplane he could fly for roughly 250 hours per year for business and comfortably travel in with his family. It was also important that he could stand fully upright in the cabin without banging his head.”

Having run his own company for many years, the buyer knew the value of data and information. He wanted an aircraft that not only met his mission requirements but also that could be purchased at a price and in a condition that would maintain its value after four years of ownership, taking into consideration depreciation, the cost of ownership, and costs of improvement.

He knew he wanted Duncan Aviation to perform the pre-buy inspection on the aircraft he eventually settled upon, and he was leaning toward a Falcon 2000EX EASy. Before making his final decision, however, he wanted a bit more information.

As a data-driven man, he wanted to see an analysis of the three aircraft (Falcon 2000EX EASy, Falcon 900EX, and Gulfstream 450) and a detailed projection of the operational costs for the next four years and life-cycle expenses of owning an aircraft.

“The prospective buyer remembered meeting me and Bob McCammon at the YPO event and discussing aspects of our Aircraft Sales & Acquisitions Services business,” says Rene. “He contacted me and asked if we could procure the data.”

Due to the multiple makes and models we support and in which we have significant history and experience, the Duncan Aviation Aircraft Sales & Acquisitions team has access to information that is outside the realm of what a typical broker/dealer would have. As a result, Rene was able to provide the information the buyer wanted on the three aircraft.

After reviewing the data, the Falcon 2000EX EASy appeared to be exactly what the buyer wanted.

“The aircraft he selected was in turnkey condition, with a neutral-colored interior. It had a solid, well-documented maintenance history and what salespeople in the industry refer to as having good bones,” says Rene. “It was well-maintained and in great shape for a used aircraft.”

Using the requested data, the buyer studied the cost comparisons among the three aircraft. The economist for the buyer’s business then flew to Duncan Aviation and looked at the relevant data—the cost of past maintenance and estimates of costs of inspections, fuel, and labor, based on the economic forecast for the next four years.

“After his economist and flight department personnel had studied the data we provided, they discussed their analysis with the buyer,” says Rene. “After then reviewing the detailed comparative analysis of the available Falcon 2000EX EASy aircraft prepared, the buyer selected the best value alternative and was confident about proceeding with an agreement for the aircraft.”

Rene negotiated the pricing and terms of purchase on behalf of the buyer. The overall transaction from the start of the LOI (Letter of Intent), APA (Aircraft Purchase Agreement), and pre-buy evaluation to the closing of the purchase took approximately 6 weeks.

Because Rene had negotiated favorable terms, the buyer was able to replace the entire interior and completely repaint the exterior. Working with a designer from his business and Lead Designer Mary Lee from the Duncan Aviation Design Team, the owner was dazzled by the Falcon’s eye-catching new interior.

Although there’s no set time frame for making a decision about buying an aircraft, Rene and the buyer were pleased with the relative speed of this transaction.

“The buyer had been ready to buy—he had a selection of aircraft that met his needs,” says Rene. “He simply wanted to see the data on the operational costs before signing the agreement. Once he studied the data, he was ready to sign. I then began negotiating on his behalf.”

Duncan Aviation has been in the business of selling aircraft since Donald Duncan founded the company in the late 1950s. Donald’s legacy remains strong today, and every member of the Duncan Aviation Aircraft Sales & Acquisitions team knows how to navigate the complexities of the aircraft transactional process. When a customer asks for information, due to Duncan Aviation’s vast in-house technical resources and data, every member of the team is able to provide accurate, critical information in a timely manner.

Duncan Aviation’s 60+-year history is firmly rooted in the sales transactions of business aircraft. Here are some of the activities taking place with Duncan Aviation’s Aircraft Sales & Acquisitions team during the week of January 14, 2019.

«Previous: ONE Goal, ONE Company, Multiple Options for Operators
»Next: CAUTION: Contents Under Pressure