Do Not Ignore Your Aircraft's Batteries

An aircraft’s battery is one of the highest-maintenance components on board. Not many other items are due every three months or 100 hours. And for organizations with heavy flight schedules, such as charter services or air ambulances, batteries could require the aircraft to be down nearly every month.

Yet this workhorse of a unit is continually ignored, left idle and unused for long stretches of time, pushed hard with low levels and occasionally allowed to deep discharge. Through it all, it is expected to function without fail.

And it is cursed when, during that one critical flight when the company’s president is on board, the battery will not crank and the aircraft and passengers are stranded.

Although the first reaction may be to fault the battery, according to Brian Teeters, aircraft battery technician for Duncan Aviation in Lincoln, Nebraska, most premature battery failures can be contributed to one thing…human error.

On a regular basis, Brian fields phone calls from operators frustrated that their batteries have not provided the long life that was advertised when they purchased them. He explains a well-maintained battery will provide three to five years of dedicated service, maybe even more. And that premature failure is not a defect or fault on the part of the battery, but rather on the operator for not purchasing the correct battery required for their flying schedule.

“The best battery purchase for a charter company, air ambulance or any other company that flies short, frequent one- and two-hour flights many times a day or week is a nickel cadmium or lead acid battery. Sealed lead acid batteries are a great option, but are not designed to function with this heavy of use for a long period of time.”

He goes on to say that extreme temperatures also impact the longevity and effectiveness of battery life. “If you fly primarily in extreme cold and hot climates, such as the northern territories of Canada or along the equator, nickel cadmium is a hard working battery and will provide the best performance.”

Brian warns, however, that just having the correct battery for your flight operation will not prevent premature failure. Batteries still require regular maintenance and care.

Properly Care for the Battery

When asked for one piece of advice regarding batteries, he was quick to point out “most problems could be avoided if the last one out of the cockpit would simply shut off the lights.

“The number one reason aircraft batteries fail at start-up is because they were allowed to deep discharge overnight when the master switch was left on.”

An overnight deep discharge is especially devastating for lead acid batteries. When a small charge is left to pull from these batteries, even for just a few days, the cells are destroyed. There is no alternative but to replace them.

“Make sure all the switches are off before putting the aircraft to bed. It takes only a few seconds to shut it down, but many pilots miss that step,” Brian says.

If powering down the aircraft continues to be a problem, Brian suggests changing to a nickel cadmium battery. Batteries will still need to charge before the aircraft is able to take flight, but the deep discharge does not do any immediate harm. However, constant discharge and recharging on a battery will take its toll. 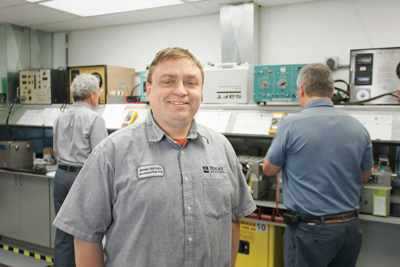 To some, an aircraft battery is a simple purchase. However, based on the number of batteries that come to Duncan Aviation for maintenance and repair, it is a purchase that should be taken seriously.

Brian and the rest of the Duncan Aviation battery team see up to 150 batteries every week.

This two-room shop has every test set, battery charger and capacity gauge available to perform capacity checks, testing and maintenance for every aircraft battery in service on the various business aircraft in use today. About 75 percent of the batteries that arrive at the shop are checked, charged and returned to customers in fewer than five days, with many others in fewer than two.

Brian is the battery go-to guy in the business aviation industry. People from around the world have sought his advice. Aircraft engineers call him and talk avionics systems, capacity and the load required of certain aircraft. OEMs have asked him for input on other battery issues. He knows more about aircraft batteries than most. And he wishes operators would give batteries more credit.

Think about it. The batteries are the first component to engage an aircraft’s electrical system and the last line of defense before everything shuts down in an emergency.

You want them to work.

You need them to work.

Battery expert Brian Teeter’s advice for getting the most out of your aircraft battery includes the following: