Their aircraft stays busy flying many hours across the United States and around the world. And when it comes to interior refurbishment, such as carpet, it is not always worth the downtime and flight cost to have it addressed immediately.

Because of this tight flight schedule, Keith was looking for a facility with the most efficient downtime at the best value and performed at the highest quality. He wanted a creative solution.
Alan Huggett, Duncan Aviation’s Northwestern regional manager, had one.

While making a stop in Coere d’Alene, Idaho, to see Keith, Alan learned the Hagadone Gulfstream was in need of new carpet. Keith asked him to have someone call with more information and a quote for service. Alan immediately called Dan Malone with the lead, knowing it was the right time, price and event for Duncan Aviation.

Dan Malone, interior completions crew leader for Duncan Aviation in Provo, Utah, saw this as the perfect opportunity for his team to go mobile. The workscope didn’t require any seat reupholstering and could be performed in the customer’s hangar.

"DUNCAN AVIATION'S INTERIOR SERVICE WAS FIRST RATE FROM THE VERY BEGINNING. THEY [DAN AND DENNIS] WERE PROFESSIONAL IN EVERY ASPECT FROM THE MOMENT GO. WORKMANSHIP AND ATTENTION TO DETAIL IS PARAMOUNT WHEN IT COMES TO MEETING OUR EXPECTATIONS AND THEY WERE ABLE TO DO SO."

Dan contacted Keith and suggested he bring Duncan Aviation’s interior services to the Hagadone hangar. Keith liked the idea and after a little bit of negotiating, a date was set for the work to begin.

In preparation for the roadtrip from Provo to Coeure d’Alene, Dan shipped the necessary equipment ahead. When he and Interior Completions Technician Dennis Peterson arrived, they began work immediately.

On a GIV, carpet extends 45 feet from behind the cockpit all the way back to the lav and baggage compartment. That is a long piece of carpet. They spent several days binding and sealing the edges with epoxy to prevent fraying and installing the carpet in the aircraft, making sure the seams were tight and edges secure.

When they stood back and were satisfied with their finished work, they immediately uninstalled it and started all over. You see, Keith didn’t want just one carpet, he wanted two sets.

The carpet is swapped out every 12 months to reduce carpet wear and increase its life.

At the end of nine days, Dan and Dennis had installed 70 yards of carpet. That’s a lot of carpet in a short amount of time.

The Hagadone Corporation is founded on the ethics of hard work, attention to detail and a relentless drive for excellence in all things. Keith recognized a similar work ethic in Dan and Dennis and was pleased with the overall result.

“Duncan Aviation’s interior service was first rate from the very beginning. They [Dan and Dennis] were professional in every aspect from the moment go. Workmanship and attention to detail is paramount when it comes to meeting our expectations and they were able to do so,” says Keith. 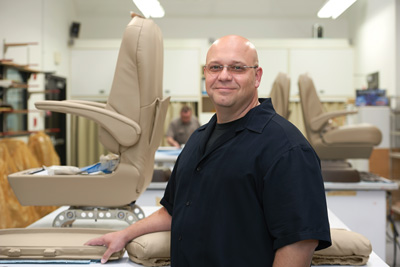 He also mentions having Duncan Aviation bring interior services to Hagadone gave them the ability to monitor the process and make quick decisions, resolving any unforeseen issues as they arose. It also allowed the Hagadone aviation maintenance department to continue performing routine maintenance during the time the aircraft was down.

Having a creative solution for a customer need separates Duncan Aviation from the rest.

Keith agrees. “In the event there comes a time to do additional interior refurbishments, Duncan Aviation will be the first phone call.”

INTERIOR SERVICES ON THE ROAD

All of Duncan Aviation’s locations are able to offer the following aircraft interior services in a customer’s hangar:

And within the next year, Duncan Aviation will be able to recover soft goods and provide a full finish.