Duncan Aviation has been working with Rockwell Collins to retrofit and certify the Pro Line Fusion® flight deck upgrade in a Citation CJ3. The aircraft will be on static display at the National Business Aviation Association (NBAA’s) annual convention November 1-3 in Orlando.

Announced at last fall’s NBAA show, Duncan Aviation will complete certification on the CJ3 by the end of 2016, providing operators with a new aftermarket option for meeting NextGen mandates while enhancing their ownership and flying experience. The upgrade replaces the factory-installed portrait displays with larger 14.1-inch landscape touchscreen primary flight displays. The new system includes intuitive, touch-interactive maps, and easy-to-use icons, giving the pilot the ability to control items on the screen through touch. Also, it eliminates the need for FMS (Flight Management System) control display units originally installed in the pedestal.

Duncan Aviation Captain Jon Kroesche flew second-in-command this summer during the CJ3’s first test flight. He has this to say about the experience, “The Pro Line Fusion® upgrade is a joy to fly. There is a wealth of information right at your fingertips. The three large touchscreens allow for easily changing flight plans. This will be a great product to see at the NBAA Conference in Orlando.”

Jeff Simmons, Duncan Aviation’s Avionics Sales Rep agrees. “The Pro Line Fusion® flight deck upgrade has been met with much enthusiasm from CJ3 operators. They are excited about transforming their aircraft and their flight experience while meeting the upcoming NextGen mandates.” 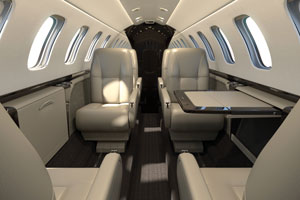 As a full-service MRO (Maintenance, Repair and Overhaul) facility, Duncan Aviation prides itself on the timely and efficient management of multi-shop projects. This allows operators to take full advantage of their aircraft’s downtime by adding other necessary and desired work to the project. In addition to the Fusion flight deck upgrade, operators may request additional work, including the following:

To learn more about the upgrade, visit www.DuncanAviation.aero/cj3prolinefusion

«Previous: Bombardier Global Express
»Next: In a Matter of Hours