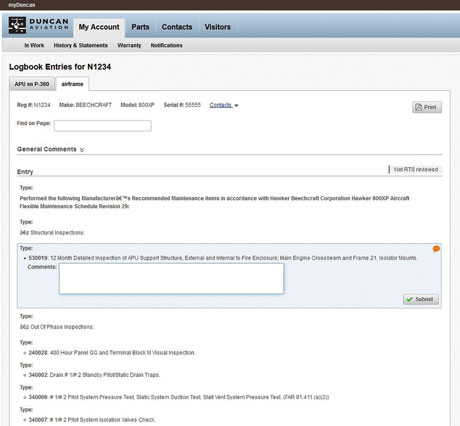 We recently added an electronic logbook feature to our web-based project management system, myDuncan. Customers are now able to view their logbook entries in real-time, categorized by airframe or engine, while at the same time communicate directly with inspectors through the system.

Duncan Aviation Quality Inspector Jerome Sveeggen says allowing customers to have access to logbook entries through myDuncan gets conversations started sooner, saving time later. “Often, customers will have questions or issues surrounding logbook entries,” he says. “Being able to address those early means they are not left until delivery day and helps to ensure an on-time and high-quality delivery of the project.”

myDuncan, launched in 2006, allows customers to monitor progress of any maintenance or upgrade event, giving them greater access and better control of their projects from anywhere in the world.

Customers receive email alerts, job status reports, and updates from their Project Manager with hour and cost estimates for all phases of the project. Through myDuncan, they are aware of items that needed attention and approval and are able to view and comment on reports and photos.

Two other myDuncan enhancements are in work: