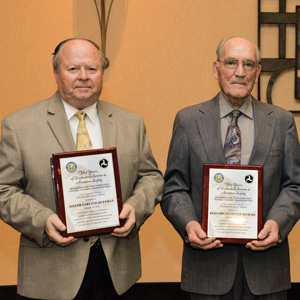 The Charles Taylor Master Mechanic Award is named in honor of Charles Taylor, the first aviation mechanic in powered flight.  Taylor served as the Wright brothers’ mechanic and is credited with designing and building the engine for their first successful aircraft. The award recognizes the lifetime accomplishments of senior mechanics.

Award recipients are required to have worked for a period of 50 years in an aviation maintenance career and must have been an FAA-certificated mechanic or repairman working on N-registered aircraft maintained under the Federal aviation regulations for a minimum of 30 of the 50 years required.

Bernard served his country by joining the Air Force and then attended Spartan College of Aeronautics and Technology, where he graduated with an Airframe/Powerplant license and a commercial pilot certificate. In January 1966, he started his 50-year aircraft maintenance career moving around the Midwest where he repaired flight controls for Douglas Aircraft Co. in Oklahoma, performed IA inspections in Iowa, conducted agricultural spraying in Kansas, and was a jet airframe shop supervisor for Duncan Aviation.

«Previous: Mark Your Calendar for the Free NextGen Seminar Closest to You
»Next: Duncan Aviation to Provide Gogo Business Aviation Customers with AOG Service