The primary driving force for most new inventions is need.

Duncan Aviation technicians are some of the most forward-thinking aviation professionals. Their desire to make their work environment safer, time more efficient, and provide a better service has produced tooling, fixtures and maintenance procedures that have fulfilled some very real needs.

Here are three examples of how this innovation affects work for Duncan Aviation customers and team members.

INCREASES SAFETY AND EFFICIENCY: The Falcon tail dock allows technicians to move about the platform freely with no restraints, the same as if they were working directly on the floor.

During the C-inspections on Falcon aircraft, technicians are lifted to the highest point of the vertical stabilizer by a boom lift. Although the lift provides the necessary height, it is often difficult to get close enough to the aircraft without causing damage to the structure or leaning outside of the basket, causing a safety concern. Even when technicians wear the required fall protection equipment, it can be a safety issue.

The Falcon tail dock is a scaffolding structure with a large platform and hand railings that surrounds the tail section of the aircraft. Technicians are not required to wear fall protection while on the platform, making it easier to comply with inspections, especially when they don’t have to continually reposition lifts. It increases safety and efficiency by allowing the technicians to move about the platform freely with no restraints, the same as if they were working directly on the floor.

Built-in storage reduces the possibility of damage to aircraft components and increases work space around the aircraft. When flight controls and other components are removed during the inspection process, they are stored on the tail dock itself, keeping them off the working platform.

"Operators love seeing the tail dock used on their aircraft," says Dale Taylor, Duncan Aviation Falcon Airframe Team Leader in Battle Creek, Michigan. "We took a Director of Maintenance and Aircraft Crew Chief up on it and showed them around. They were excited and stayed up there for almost an hour." 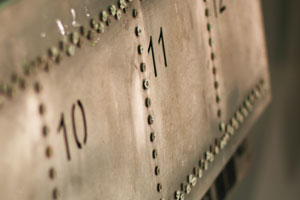 There are 1,500 plank screws in the wings of a Falcon 900 aircraft, and 2,100 in the wings of a Falcon 7X. Every time a plank needs to be removed for inspection, all screws must come out, get cleaned, and replaced in their original positions. The whole process is labor-intensive and used to take the Duncan Aviation Fuel Team more than 40 labor hours to complete.

The team spent hours manually preparing sheets of cardboard to match the unique screw patterns of each plank section. Every time a plank needed to come off, new cardboard sections would be prepared. Each screw was then cleaned individually with a hand tool to remove the sealant.

Born out of the frustration of doing the same activity over and over again for hours at a time, a set of aluminum screw boards was fabricated for each Falcon aircraft model, eliminating hours of prep time.

The largest reduction of labor hours was realized during the cleaning phase. After much discussion, research and testing, a stainless steel tank was purchased to submerge the boards in solvent. After soaking for a couple of nights and being rinsed with water, the screws come out looking like new.

The boards and soaking tank took what was once a 40+ labor hour job down to three hours. Now, operators down for fuel leaks or a fuel tank inspection can potentially be back in the air in a matter of days.

Every week, Duncan Aviation Falcon teams located at our full-service facilities in Battle Creek and Lincoln, Nebraska, remove and install the main and nose landing gear assemblies on Falcon aircraft in their hangars. Each gear is quite heavy, difficult to maneuver, and requires multiple technicians to lift into position.

It takes no fewer than four technicians to install: one on each axle, one guiding the trunnion into the ball-joint bearing, and another to help stabilize the weight. The gear is a bit awkward to handle and must approach the bearing at the correct angle in order to seat the gear trunnion correctly into the bearing. There is a lot of communication during the process to install the gear without damaging the trunnion. The trunnion is plated with chrome and, if damaged, can cost up to $130,000 to replace, with an extended downtime.

Five years ago, Duncan Aviation technicians and an outside engineering consultant began discussing how to make gear installation safer and easier with the goals of reducing the potential damage to the trunnion, reducing physical injury to our technicians, and working more efficiently. The result is a one-of-a-kind hydraulic lift that bears the weight of the gear as it is guided into place at the correct angle. It only requires two technicians to operate and since it has been in service at both locations, there have been no instances of technician injury or damage to the landing gear.

«Previous: In a Word: Transformative!
»Next: Engineering & Certification for Hire