Rewarding Careers After The Military

Members of the U.S. military are dedicated individuals who possess a unique set of experiences and skills. Many skills gained during active duty transition easily to positions with Duncan Aviation. Approximately 25% of Duncan Aviation’s current workforce has served, or is currently serving, in a branch of the military. We realize and value what they bring to our team.

While transitioning to civilian employment is a major life adjustment, there are many aspects of working at Duncan Aviation that our veteran members say remain the same: strong leadership, meeting expectations of others, and teamwork.

Keep reading to learn how the skills and discipline developed in the military has translated into successful careers for three of our team members. 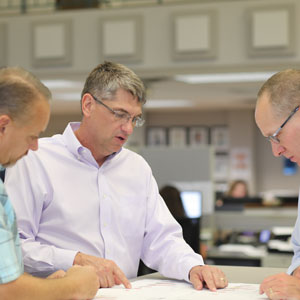 When Keith Schell first joined the Nebraska Air National Guard in 1981, his plan was to stay just long enough to get his college tuition paid. But six years turned into 36 and included piloting the RF-4C Phantom and the KC-135R Stratotanker around the world.

Keith was selected to be the 155th Maintenance Group Commander and 155th Wing Commander and appointed to lead the Air National Guard’s planning and upgrade of the KC-135R Global Air Transportation Management System. This modification impacted 420 Stratotankers stationed at 22 National Guard and US active duty locations. Prior to his retirement, Keith was appointed as Brigadier General and Assistant Adjutant General of the Nebraska Air National Guard.

Keith transitioned to the private sector in 2015, and is now Duncan Aviation’s Manager of Component Services and Parts & Rotables Sales. Having led large groups of people and projects in the military, he sees parallels in leadership, hard work, and high ethics at Duncan Aviation.

“Whether in the military or private sector, the skills needed to lead are very similar,” says Keith. “You give guidance and reward when necessary.” He has an all-inclusive approach to leadership and believes strategic planning is everyone’s responsibility. “I want input from everyone on my team. It gives them purpose and you don’t miss out on some really great ideas.” 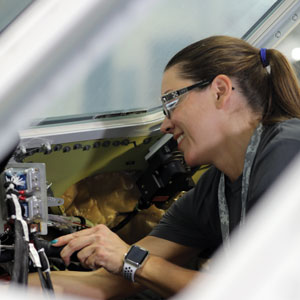 You don’t have to have a decades-long military career in order to develop strong discipline and work ethic. You are taught right away you don’t quit when you’re tired; You quit when you’re done. That’s the lesson Amy Timblin learned as a US Navy Aviation Electrician aboard the USS Nimitz, which has more than 6,000 personnel. Her detachment, based out of San Diego, only numbered 40, relatively small for aircraft carrier standards. It demanded her team put in long hours to keep the squadron’s aircraft flying. It didn’t matter if the shift was up. If the job wasn’t done, neither were they.

Amy will never forget one of her most daunting tasks—changing a landing light on the tail of an ES-3A Sea Shadow. On the surface that doesn’t sound difficult, but when the aircraft is parked on the flight deck with its wheels to the edge and the tail hanging 70 feet over the water, it’s not an easy task. Her view straight down was the Pacific Ocean.

Amy joined Duncan Aviation in 2001 as a Wiring Technician. Today, as a Master Tech she still stays at it until the job is done. “Working long hours is the norm in the military. The flight deck is noisy, hot, and stressful. Having learned to deal with stress while on ship has helped when faced with it now in the hangar,” says Amy. “There are still people waiting on you to get the job done.” 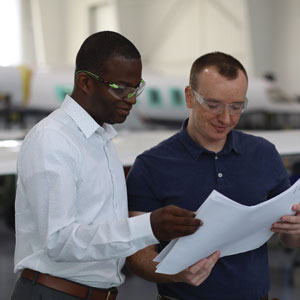 Michael Hill served in the US Air Force as an avionics communications and navigation specialist while stationed in McChord AFB in Tacoma, Washington. He says joining the military fresh out of high school is more than enough to make any young man grow up fast.

“The immediate responsibility thrust on us at such a young age is unbelievable,” says Michael. “We were responsible for very large, expensive aircraft, as well as personnel and cargo that needed to launch and return safely. It was necessary to develop communication skills quickly.” On the flight line is also where Michael learned to work as a part of a team. The military is highly diverse, with different personalities, and not everyone thinks and processes information in the same way. But as a team, you succeed and fail together. “We were a squadron working together and supporting each other toward the same goal. You just didn’t have time for ‘I don’t like this person.’”

He gives a lot of credit to the Air Force for preparing him to succeed in his career at Duncan Aviation. As Duncan Aviation’s Engineering Manager, Michael uses many of the skills he learned in the service. Do the right thing. Communicate clearly. Work for and learn from others.

Michael’s large team is located at all three of the company’s MRO locations. He leads his team in the same manner he learned to follow. “We are on the same team. We have the same goal. Let’s get there together.”

Keith, Amy, and Michael all agree Duncan Aviation really does place value on employees with military experience. “They recognize and appreciate how prepared we are to do our jobs every day,” says Amy.