A Successful Event Full Of Firsts 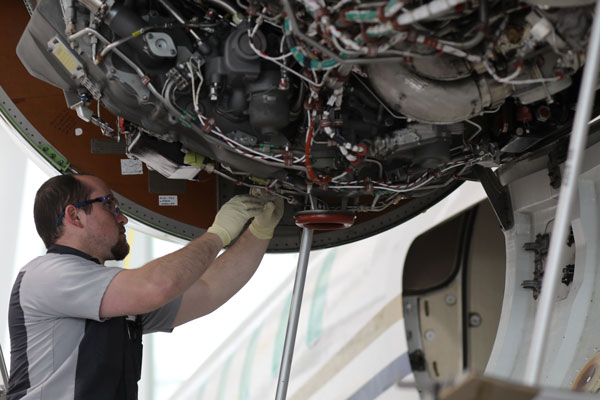 All of Duncan Aviation’s RRTs (Rapid Response Teams) travel cross-country to perform needed engine services, whether it’s for an AOG engine emergency, scheduled inspection, or to provide an extra pair of hands. They are also called upon when needed at Duncan Aviation’s three full-service MRO facilities and other RRT launch sites. Between team members Martin Delisle, Jason Anderson, and Steve Gault, there are very few RRT and Duncan Aviation locations they have not visited. But during the summer of 2019, they all responded for the first time to Duncan Aviation’s newest location—the MRO facility in Provo, Utah.

Martin, Team Leader from Long Beach, California, was excited to see the newest Duncan Aviation MRO facility. “It was super clean and still had the new hangar smell.” He, along with Jason and Steve, both RRT techs from Dallas, Texas, was equally as impressed with the PVU Line Team. “They were ready for us.”

In the days leading up to the double rental engine removal, Eric Sorenson, PVU Engine Line Team Leader, had his team busily preparing. As soon as the customer’s overhauled engines were received in Provo, they were mounted in engine stands. When the aircraft arrived, the rental engines were put through all necessary incoming engine runs. When the three RRT techs arrived, everything was set and ready to get started on the R&R.

Typically RRT techs perform these early activities. “It was great to have these logistics taken care of ahead of time,” says Jason. “It enabled us to hit the ground running as soon as we arrived.”

Steve agrees. “Eric and his team were of great help. They were quick to understand what needed to be done to make the event go a lot smoother.”

It wasn’t just the first experience at PVU for Martin, Steve, and Jason, it was the first Provo facility experience for an aircraft managed by Jet Aviation Services as well.

Jet Aviation Services manages more than 130 aircraft across the United States and has been bringing client aircraft to Duncan Aviation for years for a variety of scheduled maintenance events. One Jet Aviation Assistant Maintenance Manager has this to say, “Duncan Aviation is great to work with. I think we’ve utilized nearly every service their Lincoln facility has to offer. Everyone is very accommodating and usually able work with our tight maintenance schedule.”

This aircraft required a double R&R with a strict downtime to meet a tight flight schedule. The maintenance manager assigned called Duncan Aviation to see if we had the capacity to fit them in.

Shane Heier, RRT Assistant Manager—West Coast, worked diligently to arrange the event. “We were able to accommodate his timeframe at our Provo location.”

The first hangar at Duncan Aviation’s Provo facility officially opened at the beginning of 2019. The maintenance manager has always been able to rely on Duncan Aviation to come through for him before. He thought this double R&R was a good opportunity to give this new Duncan Aviation location a try.

Even with all the planning and preparations, scheduled maintenance events cannot prevent last-minute, unexpected flights. When the aircraft was delivered for maintenance, it was discovered an unexpected flight was added towards the end of the schedule. Knowing owners always prefer to travel in their own aircraft, the teams worked to deliver the aircraft early.

And that is exactly what they did. The RRT and PVU Engine techs came together as one team, working long hours until the job was done. The work was completed and the aircraft returned to service in three days, a full day and a half ahead of schedule. The principal was able to take his own aircraft on his flight.

This event was filled with many firsts, but if you weren’t aware of it, you would have never known. Everyone took ownership of the work and didn’t quit until the job was done. As a result, everything went smoothly.

According to the Jet Aviation Maintenance Manager, this Duncan Aviation team did everything right. “Duncan Aviation RRT technicians are professional, thorough, and they get the job done always within the required amount of time or less. I have never questioned their quality of work. I can rely on it to be done right the first time.”